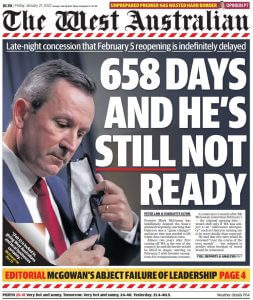 The announcement last night by the premier of Western Australia that the state’s border will remain closed to both the world and the rest of Australia has been greeted by perhaps the first negative headline in the state’s only major daily newspaper in oh 658 days.

The announcement will be devastating for many Australians who were looking forward to seeing family members they have not seen for many months or even years. Even many Western Australian residents have been locked out of their own state because they had the gall to leave the state during the pandemic for such selfish reasons like visiting sick and dying family members.

For many other Western Australians, the announcement will be met with much relief as they have allowed themselves to be consumed by such fear as a result of government propaganda that the possibility of dealing with a major outbreak of a virus that has now become endemic throughout the world so terrifies them that they will cheer on any authoritarian measure that they feel will keep them safe.

https://twitter.com/ellymelly/status/1481035540963426306?s=20 The premier of Western Australia our dear Emperor our lord and Savior our most sacred state daddy Mark McGowan has decided to help Aboriginal Australians by releasing a video so patronizing that they will surely overcome their distrust of the white fella and will stick an experimental drug into their arm.  Preview Open

As an Aussie expatriate from Melbourne, I’d hear frequent jokes about Victoria Premier Dan Andrews and his obsession with lockdowns. Mostly because Andrews has had six of them. But lately, no one is finding the humor in them anymore. After watching a live-streamed protest held at the Shrine of Remembrance in Melbourne, I saw why.

That particular protest consisted of construction workers, trade union members, and the general public decrying the excessive vaccination mandates/lockdown lunacy. It’s been compounded by the state of emergency the premier announced in March 2021 that was later extended nine months until NYE. Live-streaming coverage conducted by Melbourne independent media via Real Rukshan and Rebel News has been invaluable for showing the unbiased truth. The Shrine of Remembrance protest, and others that occurred during that week, showed a collective representation of the public, who had reached their limit. Their grievances had enormous validity, and the subsequent actions by the Victoria Police were excessive, and unnecessary. That’s not including the rubber bullets they fired.

In 1996, a madman murdered 35 people in Port Arthur, Tasmania. As a result, the Australian government, led by one of Australia’s greatest Prime Ministers in John Howard, introduced a ban on all semi-automatic and automatic weapons. To achieve this ban, Howard introduced a buyback scheme in which firearm owners would be compensated for giving up their weapons. Although this move had bipartisan support, at the time it was opposed by many people, particularly those in regional Australia where many primary producers own firearms.

Today, no politician in Australia hoping to get elected would support going back to the pre-Port Arthur firearms laws. Indeed, any change that would help responsible firearms owners, no matter how minor, is opposed by the Green Party and other extremists of the left. Truly, the best we can hope for in Australia is the status quo.

http://www.abc.net.au/news/2016-12-14/japanese-group-launches-18c-case-against-uniting-church/8117234 An Australia-Japan community group has launched legal action under section 18c of the racial discrimination act against a memorial erected by the Korean community to the comfort women who were forced to act as sex slaves by imperial Japan during the second world war. This adds to the many ridiculous cases launched recently under […]

http://www.dailytelegraph.com.au/blogs/tim-blair/cindy-binned/news-story/9286edaba86b1ffe180644c81ad49d90 Cindy Prior the Aboriginal Australian woman who took three university students to court under the Stalinist section 18c of the Racial Discrimination Act is facing bankruptcy after costs were awarded against her of about $200,000. Ms Prior who took stress leave from her job at the Queensland University of Technology and claims she can […]

http://www.news.com.au/national/politics/us-considers-taking-australian-refugees/news-story/115fb031c864ca200e533748249810f4 The Australian government has announced a deal with the United States for the resettlement of an unspecified number of asylum seekers. This deal further demonstrates the Liberal/National government’s tough stance on refugees, next on the government’s agenda will be to outlaw any asylum seeker that tries to reach Australia by boat to ever come […]

http://www.dailytelegraph.com.au/blogs/tim-blair/state-of-despair/news-story/70c0b574a1da4b63ca3f31a1c4eb5b1c The state of South Australia a state heavily dependent on renewable energy and with the most expensive power costs in Australia yesterday had less power than North Korea after a massive storm rampaged through the state. This is a clear reminder of the folly of switching from cheap reliable forms of power generation such […]

https://au.news.yahoo.com/thewest/wa/a/32743895/travellers-foot-bill-for-backpacker-tax-backflip/#stop Yesterday the Australian government announced changes to the proposed backpacker tax, the original proposal was to tax backpackers at 32.5% from the first dollar earned however due to pressure from regional industry and National Party MP’s the government has backed down from the original proposal and instead will look to tax backpackers at 19% […]

http://www.news.com.au/national/politics/fortynine-per-cent-of-australians-support-a-ban-on-muslim-immigration-survey-finds/news-story/eebc8b0115811eef638b918eb8e862e0 To the surprise of the left a new poll has suggested that 49% of Australians would support a ban on Islamic immigration with 40% opposed, of course leftist MP’s have blamed the poll on the influence of One Nation leader Pauline Hanson, while I disagree with many of One Nation’s policies (particularly there protectionist trade […]

It’s times like this I wish the US were more aggressive not just at spreading the idea of democracy around the world, but also at cloning its specific Constitution and Bill of Rights for use in other countries. The First Amendment would be handy in Tasmania at the moment, where a left-wing Greens Party candidate has lodged […] It’s often said that Australia needs to become a republic because of our lagging reputation in Asia. Many believe, for example, that our institutional attachment to the British Monarchy puzzles the masses and implies an old-world attachment that tugs on our standing in the region.

Much less discussed, however, is how silly we must look changing leaders as often as our dirty clothes. Until recently, the turbulence of the Rudd-Gillard-Rudd years was behind us. We weren’t suffering from closed-door union deals and the disruptive leadership of the Australian Labor Party. Abbott had stopped illegal boat arrivals to Australia, was fiercely paying down Rudd’s debt, ending silly government programs, and restoring a relative lack of prestige to the executive arm of government.

Yet Australia’s modern media cycle won’t permit such stable conduct: it is, after all, boring. The constant scan for sensationalism means that minor issues like giving out awards (Abbott’s honor to Prince Phillip) and, most recently, harmless jokes about rising sea levels in the South Pacific choke out issues of substance and having a steady pair of hands on the nation’s wheel.