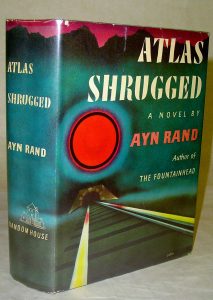 So many pixels have been rendered lately for the sake of hyperbolic takes on Donald Trump that I just have to get in on it. Why should I deny myself the fun? And far from a jeremiad on incipient fascism, my hyperbolic take is one of acknowledgement of the heroic: Donald J. Trump is that hero, a hero right out of the pages of an Ayn Rand novel… and I’m going to make you see it.

In Rand’s novels, polite society, in fact just about everyone, hates the hero. Like Donald Trump, each hero is rich, successful, driven, ornery, and unapologetic. In one case, one of Rand’s heroes is hated by his own mother. The media in Rand’s novels print nothing but lies and dark innuendos about her heroes, and most of the people in the story believe those lies and innuendos. And sadly, even though at this point we should really know better, most of us in the real world believe similar wildly biased narratives.

I know that about 99% of Ricochetti are familiar with Ayn Rand’s Atlas Shrugged, having devoured it during high school or college. Since Obama’s Fundamental Change, several of my acquaintances have either left, or have vowed to leave the United States depending on how the election turns out. But what if there was a place where […]

This may come as a shock to some people, but I’m big on Ayn Rand.  Like so big on Ayn Rand that I describe myself as an Objectivist.  I’m one of those lunatics who actually takes her seriously and tries to live my life by her philosophy.  (Pity my wife.)  (And everyone else in my […]

I just watched Atlas Shrugged III at a movie theater. Here are my initial reactions. [1] It was beautifully filmed with soft lighting and plentiful use of bokeh. The production values were good. Preview Open

Earlier today Peter posted about how a young friend of his discovered National Review’s scathing 1957 review of Ayn Rand’s magnum opus Atlas Shrugged.  That review was so brutal that Ayn Rand refused to ever speak to William F. Buckley again.  Peter asked the following question on behalf of is young friend: Preview Open