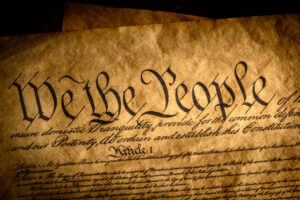 As has been suggested severally previous, the US can rescue its future from Leftist radicals via an Article V Convention of States. The eminent Mark Levin has written about the same,(The Liberty Amendments: Restoring the American Republic) proposing legislation to put the country back on course.  In my opinion it could be done in […] The other day Peter Robinson asked what I thought of Texas Gov. Greg Abbott’s call for a constitutional convention. (Peter will be interviewing Gov. Abbott for Uncommon Knowledge early next month.)

The conservative in me thinks a constitutional convention is a bad idea because of the inability to limit the convention’s work. We could go in with a Constitution with a separation of powers, federalism, and a Bill of Rights, and emerge with a wholly new framework of government that merges all state power into one government, as in Great Britain or Europe. A convention’s work would still have to gain three-quarters approval of the states under Article V, though the Convention could reject that process too.

Think of where a majority of the nation is right now. Majorities regularly disapprove of the rights in the Bill of Rights, not just those protecting criminal defendants, but also the First and Second Amendments. I don’t see Citizens United and Heller surviving a majoritarian convention. My sense is that a majority of the country probably would do away with federalism (if indeed a majority would still support the welfare state) and much of the separation of powers (judging by Trump’s success, the people would support transferring more power to the President from Congress).

Cuts are off the table. I just saw a post from the loveable JP, which reads that Trump’s plan requires 11% growth. I’m not so concerned with the peculiarities of that conversation. But, let’s zoom out a bit and enlarge the frame. No proposition for reduced taxes can be paid for. Ever. Because, the strict preemptive […]

But there’s a big difference between conducting a constitutional convention of the kind that took place in Philadelphia in 1787 versus offering a single amendment as provided for in Article V. Currently, Congress can propose a constitutional amendment when two-thirds of both the House and Senate approve it. And the states can propose an amendment too, when at least two-thirds of them (34) submit a common application to Congress that details the amendment to be proposed. Once Congress receives the completed application, it is then required to call a convention where the states will formally consider the amendment. The vote of a majority of states at this convention would send the proposed amendment out for ratification, which requires the approval of three-quarters of state legislatures (38). Two particularly interesting comments came up at the tail end of my post about Turkey’s shooting down of a Russian jet. Let me reproduce them: Those who oppose states using their power to originate amendments under Article V often start with the question, “Why amend the Constitution when nobody follows the Constitution as written?”

A number of conservatives have supported efforts to call an amendatory convention as provided in Article V of the U.S. Constitution. At the same time other conservatives are adamantly opposed to such a convention. I am curious to know how the intelligent, articulate, and civil members of Ricochet feel about the subject, and why. Preview […]