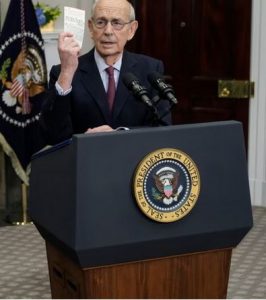 Justice Breyer pulled out a pocket constitution at his White House appearance today. Turns out it was the copy that Justice Breyer received when he entered Harvard Law School in 1964. The copy is pristine — never opened, never thumbed through. None of the cases he heard at the Supreme Court ever required him to consult it. It will make a great exhibit in his museum display someday.

But to the shock of the audience, it turned out to be a living constitution. It leaped from the frail hands of the justice and went running around the room, nipping at the heels of the guests and reminding some of the dangerous, banished German shepherd Major.

U.S. Sen. Ben Sasse, Republican of Nebraska, running for reelection and a Ph.D. historian, has proposed something I’ve been supporting for awhile now – repealing the 17th Amendment to the Constitution. That amendment, which provided for the direct election of US Senators, was one of several “progressive era” Constitutional amendments, adopted in short order, a […] The Framers did not intend the impeachment power to give Congress supremacy, in the form of being able to harass and paralyze the Courts or the president over policy differences, let alone raw political will. Nevertheless, Congress has acted, almost from the beginning, with selective contempt for the Constitution, both legislatively and in its employment of the impeachment power. There is really nothing new under the sun, including what the current majority party in the House of Representatives is doing…and it is still contemptuous of the Constitution.

Take a step back from the current tempest in the Congressional teapot and consider the facts laid out in 1992 by Chief Justice William Rehnquist in Grand Inquests: the Historic Impeachments of Justice Samuel Chase and President Andrew Johnson. The Chief Justice published this very approachable book the year that William Jefferson Clinton beat President Bush the First. Taking his book as a guide to the subject and the actors, some focused searching on the internet yields plenty of historical data and documents. Consider just the first major impeachment, along with a prelude, at the dawn of the 19th Century.

As soon as two parties formed and fought for the presidency, upon President Washington declining to run for a third term, they set about violating the Constitution with the Alien and Sedition Acts, outlawing political speech that the party in power disliked. In that context, with factions at each other’s throats, Congress impeached, tried, and removed a federal judge, then targeted a Supreme Court justice, Samuel Chase.

I wrote a few days ago, recommending actions by President Trump and Governor DeSantis in response to Hurricane Dorian. Commenters raised a familiar issue: how is this any of the federal government’s business, when we can’t find it in Constitution? Is this serious, is the federal government behaving lawlessly in disaster response operations? Or, is […] Watching progressives analyze the 2016 election, I couldn’t help but recall the story of the young boy who undertook to experiment on a housefly. After offering the fly part of a cookie crumb, the young man then commanded, “Fly!” Well sir, the fly flew, circling the room and then landing back on the table in front of the boy, who then offered another cookie fragment as a reward.  “Fly,” the boy again commanded, and again, the fly took to the air and circled the room before landing in the same location on the table. With a pair of tweezers, the child then pulled the fly’s wings off before again ordering it to “Fly!” But this time, the fly just stood there, prompting the lad to write in his little notepad: “When the fly’s wings are torn off, it goes deaf.”

Some, like Garrison Keillor, whose vicious caricatures of Mr. Trump’s voters range from intuiting their dislike for “chamber music concerts, wine tastings, lectures on Byzantine art and poetry readings” to comparing them to, “people who shoot up movie theaters,” resort rather reflexively to the sort of tawdry and infantile attacks that too often pass for reasoned analysis on the left. Several years ago, I sparred with a guy from the Village Voice following my column on Chief Justice John Roberts’ mental gymnastics in support of Obamacare. Quoting the portion of my piece wherein I mention that I drive an 18-wheeler, author Roy Edroso went on to compare my photo to Larry the Cable Guy, adding his coup de grâce, “Give him liberty or Git-R-Done!” “It is instructive,” I responded, “that when progressives, who fancy themselves as the voice of the working man, are actually confronted with one, they instinctively resort to stereotypical derision.”

With four weeks remaining before the 2016 presidential election, it seems likely that Hillary Clinton will be elected president of the United States.  The chances of a Democrat controlled Untied States Senate are at least 50-50.  Therefore, it is worth contemplating that the US Supreme Court will soon consist of 5 left of center justices, […]

So, this is bleed over from another thread but I can’t resist. We were being nattering nabobs of negativity concerning Texit (yeah, that’s now a thing . . . sorta).  My bottom line?   The chance of Texas seceding is so small it’s not measurable.  Preview Open “Scalability” problems arise in the context of certain kinds of manufacturing and industrial processes, as well as computer databases, start-up and growth-stage businesses, and some other kinds of complex systems. You can think of scalability in terms of Breaking Bad, which was basically a show about the problems and challenges of scalability. A high school chemistry teacher and his junkie wastrel former student attempt to scale up their boutique, small-batch blue meth business and turn it into a giant multinational conglomerate, while grappling with the attendant problems of production, distribution, administrative, financial, geographic and moral scalability. Hilarity and horror — in equal measure — ensue.

I don’t pretend to be an expert on this subject, but it seems to me that analogous problems of scale come up a lot in social and political contexts. Clearly, some things in society work well on a large scale, while others don’t, and it would be helpful to know why and how to distinguish the one kind of thing from the other. For example, in an earlier post I observed that — though I am more or less an atheist, and that it seems to work okay for me — I would prefer not to live in a society of atheists, because the large-scale application of the atheism principle leads to nasty social outcomes and is destructive of the kinds of political values I like.

Unfortunately, there is no simple rule that tells us whether a system is or is not scalable; one has to look closely at its inner workings. But maybe there are some patterns to point us in the right direction.

Now that the Congress has delegated the job of legislation to the administrative branch, this could be considered a Bill of Attainder: Federal health regulators have proposed banning Theranos Inc. founder Elizabeth Holmes from the blood-testing business for at least two years after concluding that the company failed to fix what regulators have called major […]