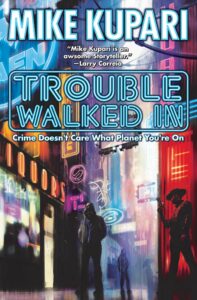 From the moment Dagny Blake entered Ezekiel “Easy” Novak’s office he knew she was trouble.  He took her job anyway. Her looks had nothing to do with it. Well, not much.

“Trouble Walked In,” by Mike Kupari, recasts the classic 1940s hard-boiled detective story in a science fiction setting. Novak is a private detective in Delta City, the largest city on the planet of Nova Columbia. He has a one-investigator office. His only employee is his researcher-receptionist Lily.

One of the sub-plots (maybe not the best term for it, but all I can think of now) of the “2010” movie (sequel to “2001: A Space Odyssey” in case anyone still doesn’t know that) is rising war tensions between the US and the “Soviet Union” which still existed at the time the movie was […]

Join Jim and Greg as they shudder at the extent of Chinese repression on the anniversary of the brutal Tiananmen Square crackdown – not only in China but now in Hong Kong as well. They also discuss the slightly disappointing May jobs report and get a kick out of the hyperbolic reaction on both sides of the aisle. And they laugh as the government issues a new report saying there is no proof that aliens are behind unidentified aircraft and also no proof that they aren’t.

“Ah! It’s you! My friend Al told me you might be coming. Al is his name, you know? Do you speak English? Well, Al isn’t really his name. It’s what we call a diminutive. Can you say diminutive? His real name might be Alan or Allen or perhaps Albert. Well, it could be a lot of things. We have a lot of names that we cut down to ‘Al.’ There are also Alfred, Aloysius, Albin, Alphonse. Hmph! It could even be short for Alexander, although normally that would be shortened to Alex. Or Alec. Or Xander. Or even Sandy. I had a friend who went by Sandy, although his real name was Alessandro. That’s the Italian version of Alexander. It means the protector of man. Alexander means that, that is. Well, so does Alessandro. And even Alejandro, which is a Spanish version of the name. They all have the same meanings.

“But not Aloysius. That was originally a German name: Chlodovech. Means ‘Famous in War.’ Which the most famous Alexander was. Of course, he wasn’t named that. But Chlodovech became several other names over time, such as Ludwig, Luigi, and Louis. One version of Louis became Alois, and that was Latinized to Aloysius. Latinized means that someone tried to make the name sound as if it were Latin, as if some old Roman had been named Louis.

A strange story emerged last week, like we don’t have enough strange stories, that the New Mexico solar observatory was evacuated and “closed until further notice”.  They also evacuated the nearby post office, both for security purposes, but beyond that, everyone is tight-lipped.  When information like that gets out, the rumor mill cranks, with talks […]

Jim Geraghty of National Review and Greg Corombos of Radio America are pleasantly stunned to see liberal California Gov. Jerry Brown veto bills from his even more liberal legislature, including one that guts due process for those accused of sexual assault on college campuses and another that would ban morals clauses for employees of religious institutions.  They also throw up their hands over reports that the FBI spent years documenting Russia’s shady but successful efforts to steer U.S. nuclear policy and uranium deals its way during the Obama years  – but never made any of it public until now.  And they get a kick out of the Republican congressional candidate in Florida who claims to have been abducted by aliens and communicated with them telepathically several times since.

I write a weekly book review for the Daily News of Galveston County. (It is not the biggest daily newspaper in Texas, but it is the oldest.) My review normally appears Friday. After it appears, I post it Sunday on Ricochet. Seawriter Preview Open

Many science fiction movies, like The Arrival, War of the Worlds, Independence Day, E.T., and Close Encounters of the Third Kind, begin with the premise that aliens from another planet show up one day without warning and land, or otherwise park, their spaceships, here on Earth.  But it seems likely that any sufficiently advanced aliens planning to visit […]

Well, I confess I haven’t seen them. I’ve been inside catching up on work.  I checked the local news, though, and it seems I should have looked out the window: