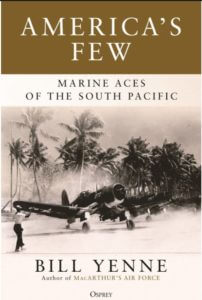 Bill Yenne has been writing aviation history for half a century. Sometimes groundbreaking, his books is always informative and entertaining

“America’s Few: Marine Aces of the South Pacific,” by Bill Yenne is his latest. It tells the story of the two dozen US Marine Corps aviators who achieved double digit ace status: ten or more kills.

All spent time in the South Pacific Theater in World War II, fighting in or from the Solomon Islands between October 1942 and May 1944. A few scored kills outside that period (including one who shot down two aircraft during the Korean War). All achieved double-ace status as a result of their exploits in the Solomons or over Rabaul.

There is an interesting piece up on NRO today, What If the World’s Most Expensive Fighter Planes Can’t Defeat Our Enemies, by Michael Fredenburg.  His thesis, neatly summed up, is: Despite lavish spending on our air forces; flawed procurement priorities and strategic doctrine, driven by contractors, has put the future of U.S. air power at […]