Nicole Gelinas, Rafael A. Mangual, and Robert VerBruggen join Brian Anderson to discuss the Supreme Court’s ruling in NYSRPA v. Bruen, including its possible effects on public safety in New York City, the implications of its legal reasoning, and the likely response by city and state lawmakers.

The bill requires the California Department of Justice to supply information identifying firearm and ammunition purchasers to a newly created research center at the University of California Davis or any other university that requests them. The information includes details such as the buyer’s name, address, date of birth, what they purchased, when and where they bought it, and more.

Join Jim and Greg as they cheer the Supreme Court decision confirming that gun owners do not need to “show cause” to get a concealed carry permit. They also criticize four Senate Democrats for demanding Google not include any information on pregnancy resource centers when people search for abortion services. And they wonder why the Biden administration is banning Juul vaping products.

By a 6-3 majority, the US Supreme Court held “the Second and FourteenthAmendments protect an individual’s right to carry a handgun for self-defense outside the home.” As a result a 1911 New York carry law that required a showing of “proper cause” prior to being allowed to carry a gun in public for self defense […] 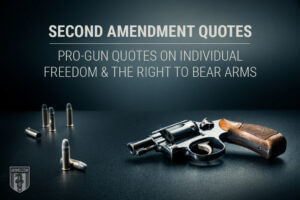 “Certainly one of the chief guarantees of freedom under any government, no matter how popular and respected, is the right of the citizens to keep and bear arms. […] the right of the citizens to bear arms is just one guarantee against arbitrary government and one more safeguard against a tyranny which now appears remote in America, but which historically has proved to be always possible.”
– Rep. Hubert H. Humphrey

“The possession of arms by the people is the ultimate warrant that government governs only with the consent of the governed.”
– Jeffrey R. Snyder, “A Nation of Cowards”

Click here to listen to the podcast! On this episode of the Resistance Library Podcast, Sam and Dave discuss federal gun control in America. Mass shootings at schools are among the most traumatic events in modern-day America. These tragic incidents receive wall-to-wall media coverage and spark heated political debate. Preview Open

I’m a local property manager and I ran into my maintenance guy John, at a client’s house. We “had a discussion.” We chatted about the election, the weather, the large influx of new residents to our state, etc. He is a retired AT&T Exec and I met him working in real estate with his wife. She and I share the same birthday. His retired side job is fixing anything that’s broken and he does it well.

Back to our brief chat – he mentioned that he had to go across the bridge for a couple of supplies and stopped into the “ammo store”. John is a veteran and owning a gun or two is not unusual. So he told me there’s no ammo – everyone’s out. The place he popped into said they’ve been sold out for weeks and no supply available. He was told that Walmart is sold out, as well as the big chain Bass Pro Shop.

The Second Amendment guarantees American citizens the right to bear arms, but both federal and state governments determine how citizens may legally exercise that right. And while both federal and state gun control laws regularly change, laws at the state level change more frequently and often without the media coverage that surrounds changes at the federal level. […]

It’s no secret that mainstream press coverage of gun ownership in the United States tends to be in favor of gun control. Journalists focus on how many people are killed by guns, how many children get their hands on improperly stored firearms, and how many deranged individuals go on shooting sprees. This anti-gun news bias is […] 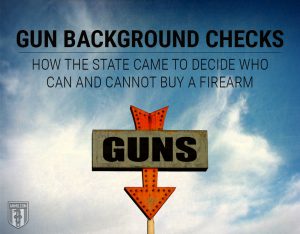 Prior to 1968, most adults in the United States could purchase a firearm without state interference. Guns were available in local retail stores, as well as mail-order catalogs, and as long as you hadn’t been convicted of a felony and you had the funds, there weren’t any questions asked.

Things are different now. Depending on where in America you are and what type of gun you want to buy, there’s a good chance you’ll need to pass a NICS-mandated background check to complete your purchase.

Although many people hold a strong opinion for and against gun background checks, they’ve proven to be an integral part of the state’s gun control apparatus – and they don’t appear to be leaving anytime soon.

Duncan Lemp was a 21 year old software developer killed in his bed by the Montgomery County MD SWAT team in a 4:30 AM raid March 12th on his home. His ‘crime’? Apparently, owning guns. Did police shoot and kill a sleeping man Preview Open

I first saw this from Instapundit.

Is his ‘state of emergency’ more real than when the President declared one at the border?  Or is he trying to manufacture one, in hopes he will be justified in calling out the Guard?  How will he enforce his ‘no weapons of any kind’?  Metal detectors, body searches?  Cries of racism will be ringing out, […] Despite not carrying a gun, I’m a 2nd Amendment extremist, which is to say I respect the US Constitution as written.

It says “the right to keep and bear Arms” — not the right to bear only “firearms,” nor only the right to “keep” arms in the home. The Constitution’s authors clearly meant the public carrying of weapons, as evidenced by plain language and history.

We’ve known for years now that the problem with gun deaths in America isn’t street gangs and other criminals, it’s the thousands of people who commit suicide with a firearm each year. This horror is affecting men (especially men who live in small, rural towns) to a much greater extent than it is women. But rather than reach out to men and channel their feelings of frustration and impotence into more positive, traditional ways, the American Psychological Association says the real problem is they’re acting like men.

“Traditional masculinity ideology has been shown to limit males’ psychological development, constrain their behavior, result in gender role strain and gender role conflict and negatively influence mental health and physical health... Researchers led by James Mahalik, PhD, of Boston College, found that the more men conformed to masculine norms, the more likely they were to consider as normal risky health behaviors such as heavy drinking, using tobacco and avoiding vegetables, and to engage in these risky behaviors themselves.”

This Isn’t a Win
GlenEisenhardt · 21 Likes

The FBI is fast becoming the SS.
Vince Guerra · 29 Likes