God gave us memories that we might have roses in December–J.M. Barrie

It’s a lovely sentiment, isn’t it?

Unfortunately, not all our memories come up roses (pace Ethel Merman): 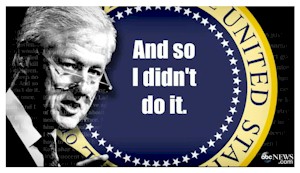 And I’m just saying, you know, if I were Osama bin Laden–he’s a very smart guy, I’ve spent a lot of time thinking about him–and I nearly got him once.  I nearly got him.  And I could have killed him, but I would have to destroy a little town called Kandahar in Afghanistan and kill 300 innocent women and children, and then I would have been no better than him.  And so I didn’t do it.–Bill Clinton, September 10, 2001

Twenty years ago today, Bill Clinton spoke before an audience of businessmen in Melbourne, Australia.  The recorded audio was not released until many years later, and then, one day, suddenly it was.  Here it is.  And while I note that the conclusion of the sycophantic flaks’ reportage was that Clinton’s “judgment was vindicated” because (it was later suggested) bin Laden might have left the building a few minutes before the proposed strike,  I don’t see that consideration playing into Clinton’s decision, based on his own accounting of it.

From the article with the details (emphasis my own):