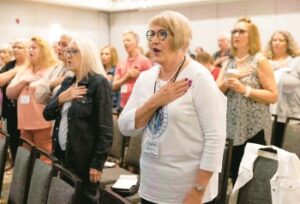 Let me say first that I am not writing this to debate the legitimacy of the 2020 election. I’m writing this piece because I was intrigued by the AP article that was just written and appeared in the Orlando Sentinel, ridiculing those who support “conspiracy theories” about the aforementioned election. The article claims conferences that feed the conspiracy narrative through providing information about the election are misguided.

We are now in September 2022; why would she be writing this article now? I found a number of revealing hints about her possible motives, the multiple subtle attacks that characterize Republicans as deluded, and how her writing may further alienate non-Republicans from Republicans today.

Since we may have become inured to the attacks on us, I think it’s important to realize that there is a multitude of examples of discrediting us; these are important to be able to identify, not just to raise our ire even further, but to realize that the overwhelming number of attacks add up to an increasingly unfair and distorted image of Republicans as a whole. These kinds of attacks can lead to additional fear and rejection of Republicans and Conservatives and our agendas, suggesting we are even crazier and outside the mainstream than Democrats assume. What do those subtle attacks look like? Here are several examples of quotations from the article. (Quotations are italicized):

“We have put together, I think, the most extensive and inclusive voter fraud organization in the history of American politics.” Joe Biden

Those were the exact words from a grainy clip of then-presidential candidate Joe Biden that opens a new movie by conservative author, pundit, and filmmaker Dinesh D’Souza, ‘“2000 Mules.” It was seen as just another gaffe by a candidate with a long history of malapropisms.

John Lott is a highly respected academic; an economist with an extensive background in statistical analysis.  In a peer-reviewed study, he has uncovered statistical evidence of upwards of 300,000 “excess votes” for Joe Biden in battleground states. In particular, in states that radically changed their absentee ballot laws in 2020 and were targeted by Mark Zuckerberg’s $400 million activist effort.

New research of mine is forthcoming in the peer-reviewed economics journal Public Choice, and it finds evidence of around 255,000 excess votes (possibly as many as 368,000) for Joe Biden in six swing states where Donald Trump lodged accusations of fraud. Biden only carried these states – Arizona, Georgia, Michigan, Nevada, Pennsylvania, and Wisconsin – by a total of 313,253 votes. Excluding Michigan, the gap was 159,065.

On this episode of “The Federalist Radio Hour,” Federalist Senior Editor Mollie Hemingway joins Culture Editor Emily Jashinsky to go behind the scenes of her new book “Rigged: How the Media, Big Tech, and the Democrats Seized Our Elections.”

Mollie Hemingway wrote a solid, well-researched book on the Kavanaugh hearings, and now it looks like she’s going to do it again to the 2020 election: “Mollie Hemingway Is Writing the 2020 Election Book the Media Don’t Want You to Read.”

The book will include interviews from lawyers, campaign activists, and election officials who were on the ground in Pennsylvania, Georgia, Wisconsin, and other swing states. It will include discussions with elected lawmakers from across the country, including senators and members of Congress, about the importance of election integrity.

I saw today that Mollie Hemingway is writing a book on the 2020 election. I can’t wait to give her my money. Because I know she’ll say the things that I want her to say? No. That’s not Mollie. Or me. I want to give her my money for this because 1) The reporting and handling of all of this has been dangerously propagandistic, and 2) after years of interacting with Mollie and seeing her approach, she is exactly the right person to investigate even if no one else will.

She asks the right questions. She doesn’t accept the answers if they don’t make sense. She keeps pulling on the thread while everyone else seems intent on denying that any threads exist at all. Who knows where it will lead? I can guess, but I can also accept being wrong about my guess.

I may be wrong in that I have not heard any articles or statements about an obvious take on the argument of voter fraud in the Presidential Election.  I think we can all agree that there is nothing that the Democratic Party wouldn’t do try and expose Donald Trump as a fool and liar.  If […]

On this episode of “The Federalist Radio Hour,” RealClearInvestigations and RealClearPolitics writer Mark Hemingway joins Culture Editor Emily Jashinsky to discuss Time Magazine’s article “The Secret History of the Shadow Campaign That Saved the 2020 Election” and how it demonstrates the corporate media’s bias in approaching the 2020 presidential election.

Whenever one of our major political parties loses an election – usually involving the presidency, but also House of Congress, governorships, and even state legislatures – there’s often a proctological exam of sorts. What went wrong? Why did we lose? What’s our path forward back to victory? Preview Open

He knew all the arguments for despair, and would not listen to them. – J.R.R. Tolkien, The Return of the King

Eva Cassidy was 33 years old and at the height of her creative powers when she was struck down by melanoma in 1996. At the time of her death, she was largely unknown outside the Washington D.C. area. But after her death, someone in the U.K. happened to play Eva’s recording of Somewhere Over The Rainbow on the radio and the result was that her self-recorded “Songbird” album zoomed to the top of the U.K. music charts. Only after she was gone did the world start to recognize her artistic beauty.

More anomalies in PA… Pennsylvania has 18 House districts. I added all GOP and Dem votes for PA and compared to Trump and Biden. Preview Open

Let’s consider a scenario.  A major corporation goes bankrupt rapidly, and lots of people lose jobs or money in stocks.  Even other companies are left holding the bag from purchase orders.  It turns out that a major executive was actively embezzling from the company and defrauding the investors while lying to the SEC.  However, the […]