You don’t have to be certain you’re transgender in order to go on hormones. In fact, Kaylee adds, going on hormones is ‘probably the best way to actually tell if you’re trans anyways.’

You might have heard that testosterone comes with bad side effects— but you’ll rarely hear them mentioned here. YouTube and Insta gurus are about fun, and increased risks of various cancers and prophylactic hysterectomy are certainly not that. The most common side effect of testosterone that gurus talk about is the one that burnishes their trans bona fides: pain. The pain is acknowledged—even conveyed with relish. Like a barefoot dash across fiery coals, braving the agony of an intra-muscular injection proves you’ve moved beyond playing dress-up. You really are ‘trans.’ And you’re not messing around.

The full quote below is from the author Ben Macintyre, two of whose books I’ve read: Operation Mincemeat, and The Spy and the Traitor. They’re both excellent reads. I downloaded his Double Cross yesterday and will start reading it today.

The quote is from an interview in the January 2021 issue of Military History magazine. He’s written a new book (Agent Sonya), which I’ve not yet read, about a little-known female WWII and Cold War spy, Ursula Kuczynski. She was a German-born Jew who spied for the Soviet Union against the Nazis, and then for the Soviets against the West during the Cold War. Macintyre’s interview ends with his summary of how we should remember her, because, as he says, she was not an easy person to like in many ways.

Chester: I been thinkin’ lately a whole lot about all this and there’s just somethin’ that you been forgettin’!

Matt Dillon: That so. 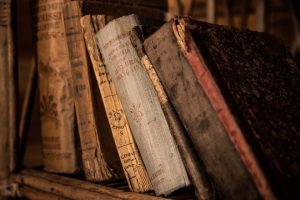 “You don’t have to burn books to destroy a culture. Just get people to stop reading them.” —Ray Bradbury

For as long as I can remember, books were my closest companions. They took me to exotic countries and taught me about the cultures and the people who lived there. They invited me to go on mysterious investigations and introduced me to bizarre and silly creatures from another world and time. They became friends who let me tag along with them, play with them, and explore new ideas with them. In their presence, life would suddenly become intriguing and fun. There was always something new to learn.

Life would have been empty and lonely without them.

December 16 is sometimes attributed to be the birthday of Ludwig van Beethoven, perhaps the greatest musical composer who ever lived. There’s no official birthday since there is no record. There is a record of him being baptized on the 17, and so they assume he was born the day before. [I like to think he was born two days before actually, the 15, and so it would make him born on my birthday!] It’s not just any birthday; it’s the 250th anniversary of his birth and should be a moment for reflection.

When one thinks of Beethoven, one’s thoughts have to go toward just how great a composer he was. We know of his greatness: the nine symphonies, the five piano concertos, the one violin concerto, the sixteen string quartets, the countless sonatas of various instrumentation, and so on, all of the highest craftsmanship and sublimity.

Dedication. To one whom I have found ever ready to aid me by his counsel, and to encourage me by his sympathy—my husband—I would affectionately dedicate this little volume. The Author.–Caroline Mehitable Fisher Sawyer, The Merchant’s Widow and Other Tales A spouse’s encouragement can be very important to a writer, or to anyone else. How […]

“As for Texas, GTT will have consequences. The state welcomes its new residents as friends, but do many of the new residents know and understand the policy set that has driven them from one state, most likely declining and blue, to the Lone Star State?” — Bryan Preston, PJ Media, 12/8/2020

Thanks to Bryan Preston, I now know the acronym that I should have put on my Christmas card: GTT. And to answer his question, yes, I do know!

I never considered a difference of opinion in politics, in religion, in philosophy, as cause for withdrawing from a friend. –Thomas Jefferson Here we are, about to have the results of the 2020 election finalized. Much chaos has ensued in the last four years. Relationships have been strained and, in some cases, ended; much hurt […]

“There are aspects of my life that I can’t get back. But there are things that I can do now. When we were in Martha’s Vineyard this summer, Michelle and I would ride bikes. And now that we have masks on, we could ride through town and people wouldn’t know who we were. It felt pretty close to what I imagined — that sense of freedom, of being able to go wherever you wanted.” – Barack Obama, People Magazine Interview, Dec. 7, 2020

I confess that I subscribed to “People” magazine as part of a free offer from a bookstore and, despite having canceled the subscription, I keep receiving new issues. I usually don’t read beyond the cover, since the cover conveys pretty much all I need to know about who and what People thinks is interesting and important. The most recent issue features Barack Obama in “His Most Revealing Interview!” I actually read this article because of the cover’s claim that “the White House nearly wrecked his marriage.” I have been thinking a lot lately about the portrayal of marriage in literature and in culture, as well as its importance in my own life. But after reading the whole article, I wanted to focus on “that sense of freedom.” 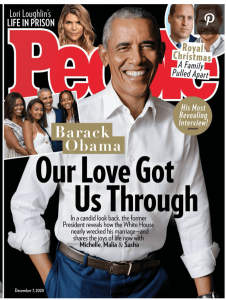 The quote above closes out the article, which emphasizes the modern celebrity magazine’s motto of “Celebrities: They’re Just Like Us!” We’re left with the poignant reflection that what Barack Obama most wants is to reclaim the freedom that his previous anonymity permitted him and his family. Let’s pretend we don’t notice that Barack Obama has just released his third memoir and has encouraged a friendly and fawning cover story on the impact of politics on his personal life, and just appreciate that Obama has found some measure of elusive freedom via the hottest fashion trend of 2020: face masks.

November 2020 began for me with this from pastor/author Chuck Swindoll. Preview Open

“I’ve found that if you put quote marks around it, people will find it credible.”—Sir Daniel Brunton, OEP What do you think, Ricochet? Is this credible? Preview Open

This Is Who Corporate America Is
GlenEisenhardt · 31 Likes