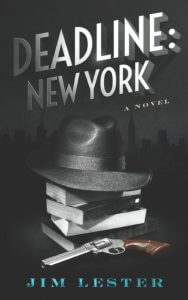 Jake August writes pulp fiction. He was a Navy Criminal Investigation Division officer, before he got shot in a brothel in Occupied Japan and got invalided out of the service. Now, in 1952 he writes paperback novels for Rattlesnake Books.

“Deadline: New York,” a mystery by Jim Lester, explores the emerging world of paperback publishing in the early 1950s. New York State Senator Benjamin McClellan is starting a crusade against paperbacks, arguing they are rotting the morals of America’s youth.  Rattlesnake Books is high on his list of offenders.

Jake is ignoring McClellan’s crusade. He has books to write. The adventure novels he churns out are not the Great American War Novel documenting his experiences in World War II. He is not yet ready to write that. Writing paperbacks pay the bills and keep him busy, and Jake is all for both.

A couple weeks ago I was told by an unlikely coworker to watch a show about a drug addicted orphan girl who played chess. I doubt I was able to hide my incredulity. Fast forward a few nights and my wife and I were trying to decide what to watch on TV. Doing our normal […] A new trailer for the upcoming motion picture Suburbicon dropped, causing much excitement among the writers on a couple of geek movie sites I visited. I think this is mainly due to the talent behind it. It’s directed by George Clooney from a script by the Coen Brothers and starring Matt Damon. Now, while Clooney and Damon […]