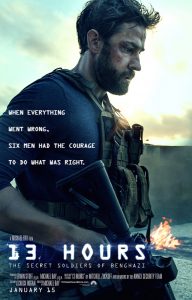 I’ve read the book, which was riveting. The movie opens this week. Anyone planning to go? Preview Open