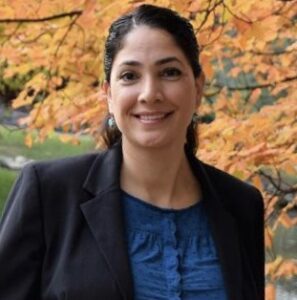 On this episode Beth and Andrew speak with education innovator Stephanie Saroki de García about her formative experiences as a Teach for America member and teaching in one of the most dangerous schools in Oakland, CA. She discusses the network of Catholic charter schools she helped found that combines optional faith-based education along with an academically rigorous curriculum. Stephanie also discusses the challenges today of hiring teachers that are not social justice activists and the difficulties of starting charter schools, especially in blue states. Stephanie also passionately shares her views on the benefits of faith as a component of a child’s education.

Stephanie Saroki de García is co-founder and managing director of Seton Education Partners, which she helped launch in 2009 to expand opportunities for parents in underserved communities to choose an academically excellent, character rich, and—for those who seek it—vibrantly Catholic education for their children. For over five years, Stephanie directed the Philanthropy Roundtable’s K-12 education programs, where she spearheaded a series of conferences, strategy sessions, and publications on breakthroughs in education philanthropy. She co-wrote Saving America’s Urban Catholic Schools: A Guide for Donors and also served on the strategic planning committee for the Archdiocese of New York’s school system, chairing the committee on school leadership. Stephanie was a Teach for America corps member in Oakland, California, where she taught high school English. She attended Harvard’s Kennedy School of Government as a dean’s fellow and while completing her master’s degree in public policy at the Kennedy School, Stephanie worked at the Office of Management and Budget. Stephanie is also a proud mom to two children.