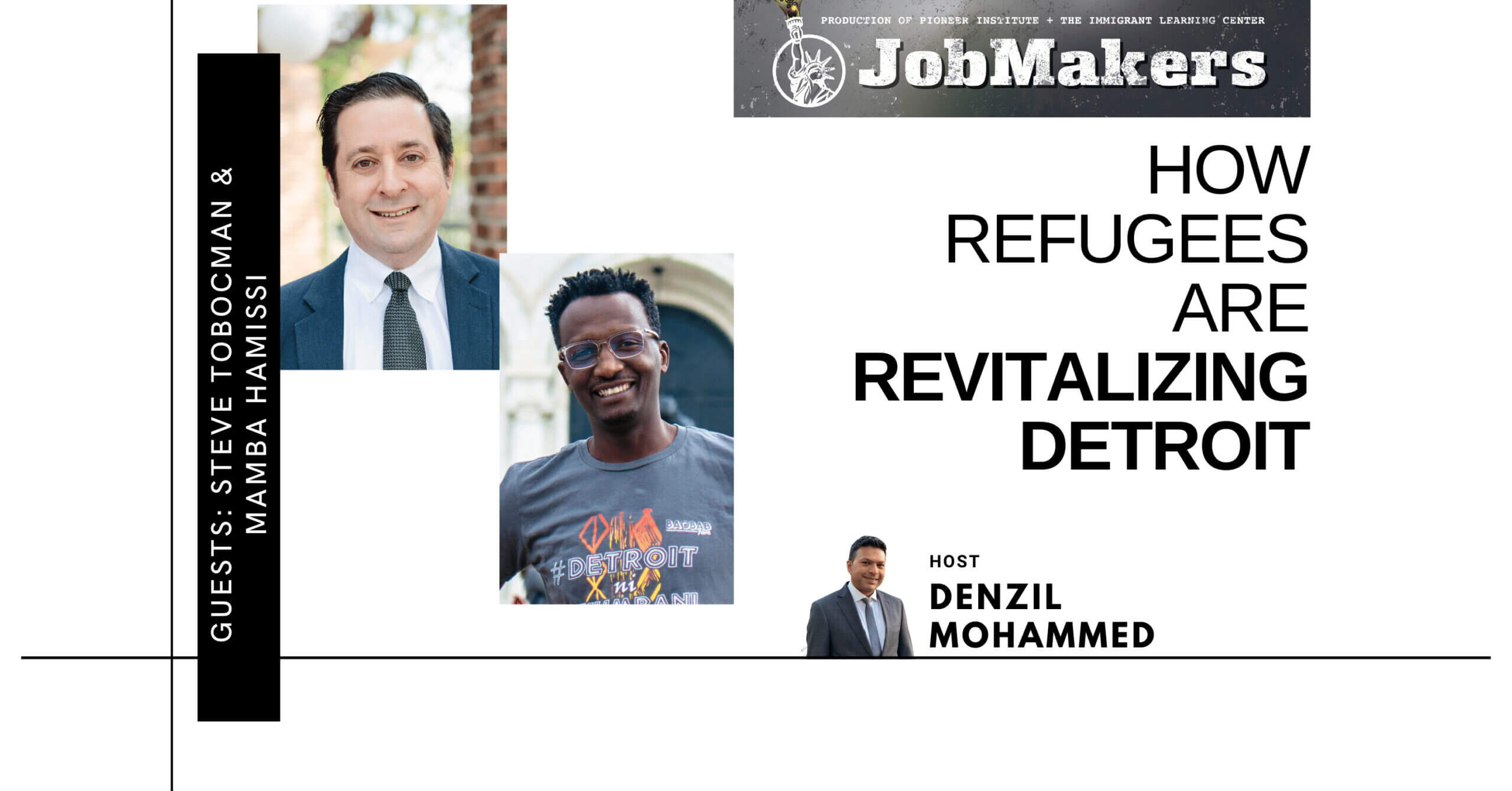 This week on JobMakers, host Denzil Mohammed talks with Steve Tobocman, head of the economic development nonprofit Global Detroit, and one of the thousands of refugee business owners he’s assisted, Mamba Hamissi, Burundi native and co-founder of Baobab Fare, an East African restaurant. They discuss their work to harness the immigrant work ethic to rebuild Detroit and infuse it with life and culture. In the early 2000s, the city fell on hard times, when population loss and the economic downturn led to the largest municipal bankruptcy filing in U.S. history. But that’s where immigrants and refugees come in. As they’ve done for generations, immigrants move to places with affordable rents, and they often have few other options for earning an income than starting small businesses. It’s no wonder then that they have higher than average rates of entrepreneurship. We’ll learn about how a modest investment in a newcomer’s business can help lift up an entire community, in this week’s JobMakers podcast.

Mamba Hamissi is originally from Burundi, East Africa. His wife, Nadia, was an activist there, and her life was threatened. They decided to flee the country and applied for refugee status. America was the first country to provide a refugee visa, but only for Mamba’s wife. Nadia, while pregnant, left Africa and was living in a shelter here in America before Mamba finally got to join her, when his children were 2 years old. He and his wife launched a restaurant, Baobab Fare, a traditional East African eatery and cafe in Detroit’s New Center neighborhood. During and after COVID, the couple have prepared meals for frontline workers, and donated proceeds from the sale of their imported Burundi coffee to support immigrants impacted by the pandemic. Their business was named by the popular food blog, Eater, as one America’s top dining destinations.

Steve Tobocman has served since 2010 as executive director of Global Detroit, a regional economic and community development organization advancing immigrant-inclusive strategies to drive the revitalization of Detroit. Steve also led the creation and growth of the Welcoming Economies Global Network, a 10-state regional network of immigrant economic development peer initiatives across the Rust Belt, and co-led the economic integration session at the Obama White House’s first immigrant integration convening. Steve has authored numerous studies and research reports and is often a featured speaker on the topic of immigrant economic development and has opinion pieces on the topic appear in the Washington Post, Politico, and numerous local and national publications. Steve previously served as the elected representative from Michigan’s 12th State House District in Detroit. He co-directs the Michigan Political Leadership Program at Michigan State University and is a partner at New Solutions Group, LLC, a Detroit-based consulting firm. Steve earned his Juris Doctor cum laude from the University of Michigan Law School and a Masters in Public Policy from UM’s Ford School of Public Policy.