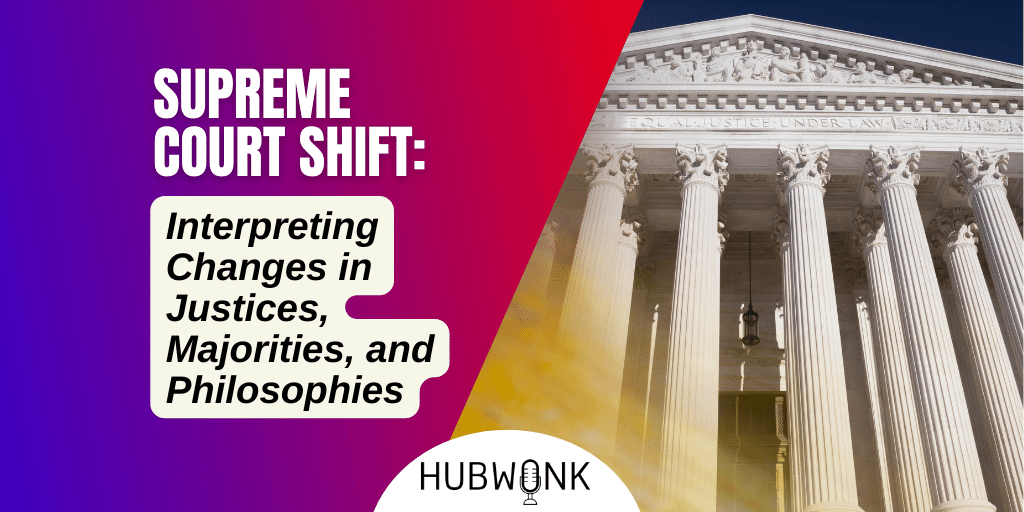 This week on Hubwonk, host Joe Selvaggi talks with Ilya Shapiro, constitutional scholar, author, and senior fellow of Constitutional Studies at the Manhattan Institute, about the changing makeup of the court, and how this term’s most high-profile decisions reveal the judicial philosophies that comprise the current bench.

Ilya Shapiro is a senior fellow and director of constitutional studies at the Manhattan Institute. Previously he was executive director and senior lecturer at the Georgetown Center for the Constitution, and before that a vice president of the Cato Institute, director of Cato’s Robert A. Levy Center for Constitutional Studies, and publisher of the Cato Supreme Court Review. Shapiro is the author of Supreme Disorder: Judicial Nominations and the Politics of America’s Highest Court (2020), coauthor of Religious Liberties for Corporations? Hobby Lobby, the Affordable Care Act, and the Constitution (2014), and editor of 11 volumes of the Cato Supreme Court Review (2008-18). He has contributed to a variety of academic, popular, and professional publications, including the Wall Street Journal, the Harvard Journal of Law & Public Policy, Washington Post, Los Angeles Times, USA Today, National Review, and Newsweek. Shapiro has testified many times before Congress and state legislatures and has filed more than 500 amicus curiae “friend of the court” briefs in the Supreme Court. He lectures regularly on behalf of the Federalist Society, is a member of the board of fellows of the Jewish Policy Center, was an inaugural Washington Fellow at the National Review Institute, and has been an adjunct law professor at the George Washington University and University of Mississippi. He is also the chairman of the board of advisers of the Mississippi Justice Institute, a barrister in the Edward Coke Appellate Inn of Court, and a member of the Virginia Advisory Committee to the U.S. Commission on Civil Rights. Earlier in his career, Shapiro was a special assistant/​adviser to the Multi-​National Force in Iraq on rule-of-law issues and practiced at Patton Boggs and Cleary Gottlieb. Before entering private practice, he clerked for Judge E. Grady Jolly of the U.S. Court of Appeals for the Fifth Circuit. He holds an AB from Princeton University, an MSc from the London School of Economics, and a JD from the University of Chicago Law School.