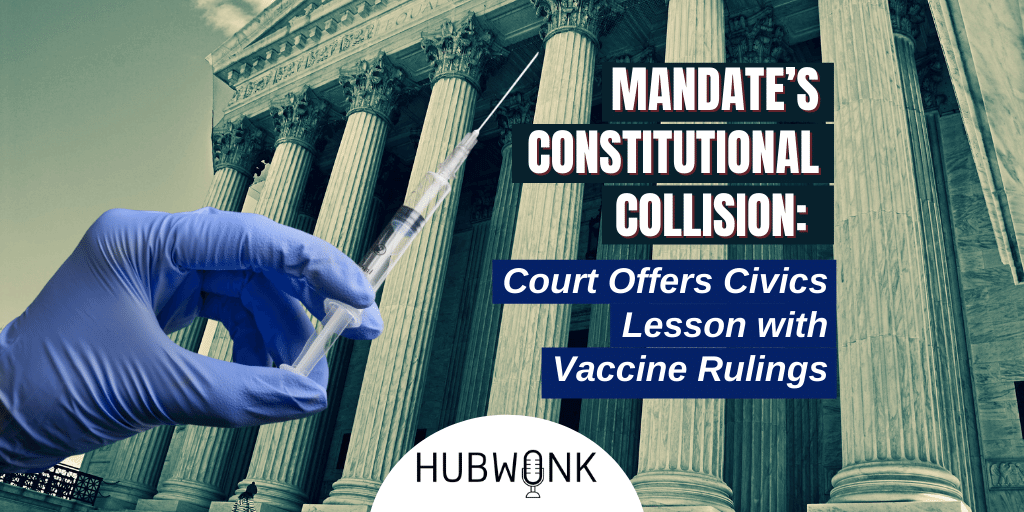 Hubwonk host Joe Selvaggi talks with Cato Institute Vice President Ilya Shapiro about the recent Supreme Court vaccine mandate rulings and what they tell us about the limits of executive branch power and the sitting justices’ views on the guidance of the U.S. Constitution.
Guest:

Ilya Shapiro is a vice president of the Cato Institute, director of the Robert A. Levy Center for Constitutional Studies, and publisher of the Cato Supreme Court Review. Before joining Cato, he was a special assistant/adviser to the MultiNational Force in Iraq on rule of law issues and practiced at Patton Boggs and Cleary Gottlieb. Shapiro is the author of Supreme Disorder: Judicial Nominations and the Politics of America’s Highest Court (2020), coauthor of Religious Liberties for Corporations? Hobby Lobby, the Affordable Care Act, and the Constitution (2014), and editor of 11 volumes of the Cato Supreme Court Review (2008–18). He has contributed to a variety of academic, popular, and professional publications, regularly provides commentary for various media outlets, is a legal consultant to CBS News. He holds an AB from Princeton University, an MSc from the London School of Economics, and a JD from the University of Chicago Law School (where he became a Tony Patiño Fellow).