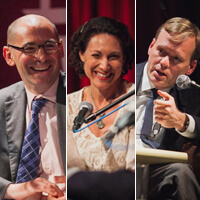 Welcome to the Harvard Lunch Club podcast for October 18, 2016 it’s the Rigged Podcast edition of the show. We are thrilled to have the chance this week to talk matters philosophical and transcendent (and Supreme Court) during our exclusive interview with Emily Bazelon of the New York Times Magazine and the Slate Political Gabfest who joins us again at HLC.

The Trump Train continues to clatter down the tracks and the days of rigorous speeches and focused message in late August and early September that brought the race to parity seems to be a thing of the past. Trump continues to draw tens of thousands but The Donald’s focus seems to be on polls and process. We discuss this and we also discuss a powerful piece by Hoover Institution historian and overall conservative big cheese Victor Davis Hanson – in The National Review no less – arguing the case for conservatives to vote for Trump. (We thought that was a no-brainer long ago).

We’ll have our shower thoughts and our hidden gem for this week is Buster Poindexter’s cover of Castle in Spain from Disney’s Babes in Toyland.

This edition of the HLC podcast is brought to you by SaneBox. If your inbox is out of control (and who’s isn’t) try the SaneBox solution. Go to Sanebox.com and enter the promo code HLC (that’s us) and get an extra $25 off on top of the two week free trial.

Follow us online at Harvardlunchclub.com, on twitter @hlcpodcast and at Richocet.com. And now, if you like the podcast you can buy Todd and Mike a cup of coffee by hitting our new “donate – buy us coffee” button for a fixed $2 donation. We thank you. 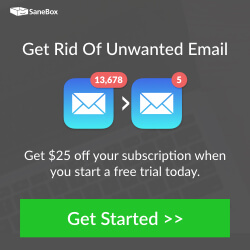