As regular listeners know, we never tire of beating up on Progressivism—both the old kind and today’s high-octane version—and we especially like to beat up on Woodrow Wilson. Most of what we know about Wilson’s perfidy comes from the ur-text of Wilson criticism, Ronald J. Pestritto’s Woodrow Wilson and the Roots of Modern Liberalism from 2005. 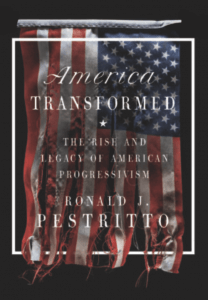 R.J. (as he is known to his friends), is out this week with a terrific new book that builds on and vastly extends his previous work, America Transformed: The Rise and Legacy of American Progressivism, just out this week from our friends at Encounter Books. This book deserves to take its place as the pre-eminent work that surveys the whole scene, bringing in new themes of the role of the “Social Gospel,” imperialism, the lasting effect of Wilsonian internationalism on American foreign policy, and many other worthy threads. In particular, the closing chapters of the book look at the ways in which radical progressive ideology informs the “administrative state” running amok in Washington.