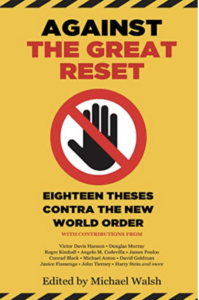 COVID was the ultimate crisis for progressives, because it was global in scope and allowed an appeal to “science” to bolster the vast new claims of authoritarian power over entire populations. The World Economic Forum called for a “Great Reset,” in which our globalist elites would undertake to use the COVID pandemic to effect a wholesale restructuring of the world’s economy, always along the dreamy utopian lines of failed socialist experiements everywhere. 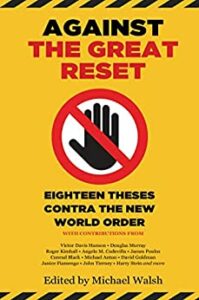 The king welcomes Michael Walsh, a ridiculously accomplished author, screenwriter, and novelist. His new book, Against the Great Reset: Eighteen Theses Contra the New World Order, features essays from a murderer’s row of conservative intellectuals. His other work includes six novels, seven works of nonfiction, and a hit Disney movie. The former classical music critic of Time magazine, he is now a regular contributor of political and cultural commentary.

After the interview, Jon talks about the curious attack on Paul Pelosi, the closing days of the midterm campaigns, and Chief Twit Elon Musk. Subscribe to the King of Stuff Spotify playlist featuring picks from the show. Continuing the Brazilian theme, Jon recommends his favorite song of all time, “Over and Out” by Pile of Love.

Steve Hayward talks this week with author Michael Walsh about his new book, The Fiery Angel: Art, Culture, Sex, Politics, and the Struggle for the Soul of the West. Walsh has encyclopedic knowledge of high culture from Homer to Rocky IV, with detours to opera, novels, fine art, and classical music along the way, revealing deep layers of political and cultural meaning and explaining why the cultural struggles of our time are the key to winning our political battles. He also throws down on the defects of the modern conservative movement.