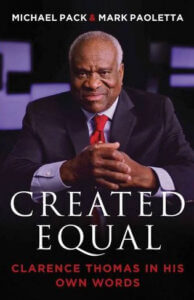 Today, the King is joined by Mark Paoletta, co-author of the new book, Created Equal: Clarence Thomas in His Own Words. In the follow-up to the wildly successful documentary by the same name, the book builds on dozens of hours of groundbreaking, one-on-one interviews with Thomas to share a new, expanded account of his powerful story for the first time.

Mark Paoletta worked alongside Thomas during his confirmation, served as OMB’s general counsel under Trump, and was chief counsel and assistant to Vice President Mike Pence. A veteran lawyer, Paoletta specializes in representing clients in congressional investigations and is noted for his work on the confirmations of Justices Gorsuch and Kavanaugh.

Then Jon talks wraps up a few big stories in the news, including SCOTUS’s Week of Greatness and more tragedy along the border. Subscribe to the King of Stuff Spotify playlist featuring picks from the show. This week, Jon recommends “Clipper” by LA-based dreampoppers Launder.