Glenn Ellmers has done it again, with a fresh provocation entitled “America Never Existed.” Say what?!?!  Did he drink some 1619 Moonshine or something?

Two favorite guests and friends join us at the bar for this week’s happy hour, to hash out bar fights they started in less reputable watering holes.  Jeremy Carl argues in The American Conservative that there needs to be “A Republican Counter-Elite,” while Glenn Ellmers continues to spark controversy with his article a year ago, “Conservatism Is No Longer Enough,” and now, last week, a sequel (channeling his Lordship Kevin Bacon in Animal House)—”‘Remain Calm, All Is Well’; How Not to Save the Republic.”

What we’re really after is a response to two great axioms from classic authors. The first is G.K. Chesterton, who wrote 100 years ago: “The business of Progressives is to go on making mistakes. The business of Conservatives is to prevent mistakes from being corrected.” How is it that we’ve taken so long to catch up with his perception? The second is from Eric Hoffer, and bears on the dissatisfaction expressed today in the phrase “Conservatism, Inc”—”Every great cause begins as a movement, becomes a business, and eventually degenerates into a racket.”

Jordan Peterson took the intellectual world by storm in 2016, bursting on the scene in a way not seen by a non-leftist thinker since Allan Bloom in the late 1980s. His idiosyncratic mix of Jungian psychology, existential philosophy, and common-sense self-help advice (also lobsters!) as expressed in his best-seller 12 Rules for Life: An Antidote to Chaos, is hard to sort out at times.

Glenn Ellmers, one of our favorite recent authors (who also got a long notice from Thomas Byrne Edsall’s latest New York Times column this week), took a deep dive into “the Jordan Peterson phenomenon” in the Claremont Review of Books back in 2018, having attended one of Peterson’s live appearances in Washington DC. Above all, we marvel at how Peterson cooly flummoxes his critics and media interlocutors, as in the justly notorious TV interview with the obtuse Cathy Newman in Britain in 2018.

Almost completely ignored by conservative media, there is a growing generation gap emerging within young conservatives that in some ways resembles the “generation gap” of the 1960s which saw the new left “hippie” generation emerge from liberal homes, as Midge Decter explained in her early book Liberal Parents, Radical Children.

Now it is happening on the right. I started picking up on this story with Michael Anton’s long essay almost three years ago on the phenomenon of the underground but highly popular book Bronze Age Mindset, which, it must be said, is a very different book from The Conservative Mind or The Road to Serfdom. Then I started following a group of mostly younger conservatives who participate actively on Twitter, and sometimes live in the “Spaces” chat communities that Twitter has launched. Most of this younger cohort participate under a pseudonym, because in the age of cancel culture their politically incorrect views, and moreover their transgressive humor (they actually make George Floyd jokes, which is worse than Helen Keller or Anne Frank jokes), would get them instantly censored if not worse. 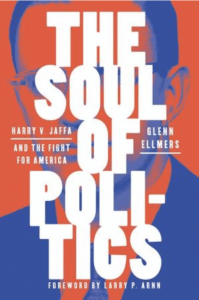 Next Tuesday, Encounter Books will publish Glenn Ellmers’ magisterial intellectual biography The Soul of Politics: Harry Jaffa and the Fight for America, and Glenn joins us this week to walk through some of the highlights in the book in what is turning out to be a month-long “Jaffapalooza.”

Naturally, we draw Glenn into our running argument about the problems of communicating the proper understanding of the principle of equality in an age of raging “equity,” which is not the same thing. But from there we move on to surveying the capacious mind of Jaffa, including his excellent but overlooked work on Shakespeare, and how, over course of 40 years, he changed his mind about Lincoln and the American Founding.

Glenn had access to a large number of Jaffa’s early letters and papers that no one has seen before, such as his extensive correspondence with Leo Strauss and Joseph Cropsey (among others) over the years.

This special 250th episode of the Power Line podcast offers a twist on our Three Whisky Happy Hour format, as Lucretia and I put aside our Glen Livet in favor of talking with Glenn Ellmers. Glenn is a senior fellow of the Claremont Institute, research fellow at Hillsdale College, author of a forthcoming biography of Harry Jaffa entitled The Soul of Politics, and author of several recent articles at The American Mind on the state of the conservative movement today that are raising eyebrows and blood-pressure counts.

The most controversial recent piece is “‘Conservatism’ Is No Longer Enough.” It throws down a basic challenge about whether there is much left to “conserve” in American institutions and culture right now without a serious counter-revolutionary effort. It drew the attention of Tucker Carlson earlier this week: you can see a short preview for the episode here. Our conversation ranges  widely over what prudence demands, and whether conservatives ought to support an Article V constitutional convention to discuss formal secession or other changes to restore constitutional government. Conservatives have always feared an Article V effort might lead to a “runaway convention,” but at this point a runaway convention might be the best case scenario.