On this episode of The Federalist Radio Hour, Gigi Georges joins Culture Editor Emily Jashinsky to discuss her book “Downeast: Five Maine Girls and the Unseen Story of Rural America.” 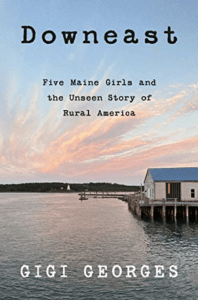 If you only go by the major media or your local college sociology department, you’d think rural America is a hopeless domain of drug and alcohol addiction, downward mobility, and dysfunction. Far from it, at least in rural Maine, where author Gigi Georges decided to spend several years getting to know and tracking several young women as they made their way through the challenges of their small, working class communities.

“Downeast” refers to the remote northeastern corner of Maine that is overlooked by tourists, summer sailors, and fall leaf-peepers, and the story Georges tells is one of resiliency rather than the cliche of a downward spiral that is most often summoned to mind for the rural midwest and elsewhere. Downeast is thus a success story of sorts, showing that vital community support networks, both formal and informal, depend ultimately on the shared rootedness of the place, which can’t be replicated or preserved by what she calls “codified institutions.” As such her stories of the five main subjects and their community is a Tocquevillian treatment.

Our conversation about this charming and beautifully written book ranges widely from the stories of the five girls to the role and resiliency of the lobster fishing industry, and we have some callbacks to some classic works that bear on the wider subject, such as Robert Nisbet’s Quest for Community, and Jane Jacobs’ Death and Life of Great American Cities.