Prof. Charles Kesler, editor of the Claremont Review of Books, and author, most recently, of The Crisis of the Two Constitutions, recently visited Berkeley to give a lecture on his book, and sit down with John Yoo and me to discuss what we’re calling the “Claremont Question,” which is really just a headline for several controversies.

The largest is the “Trump question” and the character of nationalism and populism generally, but we also discuss the controversies over the 2020 election, January 6, and the role of our friend and Claremont colleague John Eastman, who is being dragged through the mud by the vengeful left. 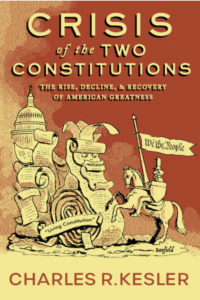 Crisis collects several of Kesler’s old and new essays and details how we got to and what is at stake in our increasingly divided America. In addition to explaining the three waves of liberal-progressive thought over the last century, Kesler also covers the significance of Trump’s emergence, and what it portends for the future. He also responds to the attack Boston College Professor Shep Melnick made on the book, so there’s an element of Fight Club in this episode, too.

Why, even after electoral triumphs, have conservatives had such a hard time governing? You think this question only applies to today? Twenty years ago, as part of the American Enterprise Institute’s Bradley lecture series, Dr. Charles Kesler gave an answer to why conservatives felt adrift. That lecture is just as relevant now as it was in 1998, and it forms the basis of this episode of The American Mind Podcast.

In this interview, you’ll hear why Dr. Kesler says American conservatism can only feel grounded when it argues policy based on the principles of equality and justice. But, to get there, we have to work our way through different pieces of conservatism’s intellectual heritage. Only then can we see “what’s wrong with conservatism.” Steve, Paul, and John present Episode 19 of Power Line. They are joined by Professor Charles Kesler of Claremont McKenna College, the editor of the Claremont Review of Books.

Professor Kesler is one of the scholars who signed a letter objecting to the College Board’s new standards for teaching American history to advanced placement high school students. The standards require teachers to put American history in a global, leftist framework. The discussion of the standards and their defects was lively, to say the least.

They also discussed the Pope’s ill-advised and ill-informed foray into climate science and the entry of Jeb Bush and Donald Trump into the Republican presidential race.

This week on the podcast: strategies and secrets. Author and fellow at the Claremont Institute Charles Kesler stops by to discuss his book I Am The Change: Barack Obama and the Future of Liberalism. Then, National Review’s (and the co-host of the Beltway Buzz podcast) Robert Costa stops by discuss his off the record chat with the President. Should conservative journalists agree to such an arrangement? It’s debated on the show, but tell us what you think in the comments.