Today on the show democrats are on day two of their melt down over Tim Scott’s rebuttal to Biden, speaking of Biden no one watched his snoozefest of a speech, Florida’s new election law gets less media coverage because Stacey Abrams isn’t running for governor there, white farmers sue over racial discrimination, a controversy erupts around JD Vance’s comments on universal childcare, the NFL draft kicked off last night and former Jeopardy contestants get triggered by the number three.

Moe and more, it looks like Gov. DeSantis is showing the way. His freedom and liberty oriented state legislation is a test drive of the kind needed at the national level to put in place the policies needed to defeat and destroy the Woke in public and commercial life.

The difference between him and many other prominent conservatives is that he is executing. He’s putting in place the reforms that others talk about. He is showing that he knows how to work the political system he has to strengthen his position and arguments.

Today on the show Biden addresses congress with a wishlist of progressive wet dreams, Senator Tim Scott gives a sobering rebuttal, Senator Ted Cruz takes on the woke corporate culture, democrats unrestrained spending will have a devastating impact, Andrew Cuomo is a serial killer of the elderly plus how differently the media has reacted to both Rudy Giuliani and Hunter Biden being under investigation.

https://www.foxnews.com/politics/feds-search-giuliani-apartment-ukraine-investigation What took so long for the swamp to retaliate for everything Trump?   Preview Open

Today on the show what to expect from Biden tonight, the CDC gives permission to do things that outside, Tucker Carlson becomes the new bogeyman for the media, the left grapples with redistricting woes of their own making, the left goes after Joe Rogan for giving a scientifically factually correct answer and Congressman Chip Roy stops by to give an update on the southern border.

Tonight (April 27) I finally attended, for the first time, a meeting of the Calhoun County (Michigan) Republicans. The local Republicans have changed since the 1980s. Ours is one of the local Republican parties that censured our Representative, Peter Meijer, for his vote to impeach President Trump. And it seems to know how to come […]

Today on the show John Kerry is an Iranian tool, Biden wants us all to eat grass to save the planet, blue states lose in the latest census and prepare for unfavorable redistricting, the company Basecamp firmly abandon’s wokeness, James Carville explains how progressive wokeness is harming the democrat party and teachers unions continue to screw over minority students. 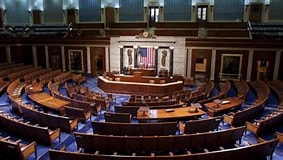 The House of Representatives has gone mad, and like COVID, the stupidity has gone viral in Washington DC. Some Senators seem to be suffering from the lack of oxygen necessary to make coherent decisions, as well coherent arguments. Viral stupidity is spreading beyond elected officials to include the media, faculty lounges, state governments, federal appointees, and former elected officials.

Knife fights are now a rite of passage for angry teens, all carbon dioxide must be eliminated, and we must obey the ayatollahs of social media. Every argument, counter-argument, proposal, and counter-proposal must be accompanied by shouts of racism. Political commissars in the corporate, military, and civil world root out individual thought, and ensure collective guilt must be the standard observed in every decision. I’m all for Caitlyn Jenner running for governor of California.  Can’t be worse than “Gruesome Newsom”: https://www.newsmax.com/politics/caitlyn-jenner-california-governor-run/2021/04/23/id/1018746/ Preview Open