In earlier posts, I put forth my take on the lack of a plan for the January 6th riot that took place in the Capitol building in Washington DC. I’ve been following the news on what happened, I’ll call it the under-reaction on January 6th. Now there seems to be an overreaction for the inauguration of Joe Biden.

The FBI has now been walking-back the story of capture and assassination teams breaching the Capitol. The Norfolk FBI office states that they issued warnings, yet the DC office has been silent on whether they were aware of warnings and warned the Capitol police of those warnings. The agent in charge in Norfolk may be on his way to Billings, Montana in the very near future if Democrats in Congress have their way. One must not disturb the narrative.

Is there a place where we can look at any court documents regarding those arrested in connection with the social justice protest gone bad at the Capitol last week? Can we learn the names and the charges against them? I’m asking for a friend. It would also be nice if we could get a list […]

From the Second City Cop farewell: The Chaplains – Fr. Brandt has done and continues to do God’s work. It is the only police charity we contribute to because we know exactly where every dollar is going. And there isn’t a finer man of G-d alive than Rabbi Wolfe. When we hear he’s in the […]

This fence is my photo of the week. Thanks to Architectus for the photo. Unfortunately, it should have been in place on January 5th outside the Capitol building. This fence would have prevented the launching of a thousand posts, media punditry, and stupid comments from Nancy Pelosi, and Chuck Schumer. The impeachment word would have disappeared, as well as hundreds of thousands of comments.

One woman and one Capitol police officer might still be alive if this fence had been in place on January 5th. We wouldn’t have been subjected to videos of violent morons trashing the interior of the Capitol. We wouldn’t have had to listen to morons that were silent for months on violence in American cities that were subjected to mostly peaceful protests. There were a lot of rioters that got their Christmas shoplifting done in those summer months.

Might be time to upgrade to an A-10 after the summer of rage. Preview Open

Apparently Capitol Police rejected offers of assistance of additional law enforcement help. I listened to a press conference Thursday morning involving the mayor of DC. She said there was going to be an investigation of what happened. That tells me that there was no coordinated plan to protect the city, or federal buildings.

WASHINGTON — Three days before the pro-President Donald Trump riot at the Capitol, the Pentagon asked the U.S Capitol Police if it needed National Guard manpower. And as the mob descended on the building Wednesday, Justice Department leaders reached out to offer up FBI agents. The police turned them down both times, according to a defense official and two people familiar with the matter.

You have all heard the phrase “thin blue line” and seen the flag that represents it.  The phrase generally represents the idea that police and policing are all that separate us (the good people) from anarchy.  The flag represents support for police. In the last few years the flag has become a lot more popular […]

Legitimacy and Rule of Law. Keystones of civilized governance. These common themes appeared frequently in my coverage of Iraq, Afghanistan, Thailand, and more. I seldom have written a word about Nepal but I spent a year there including much time with Maoists. That entire war was about unfairness, economy, and legitimacy. The Maoists won and […] 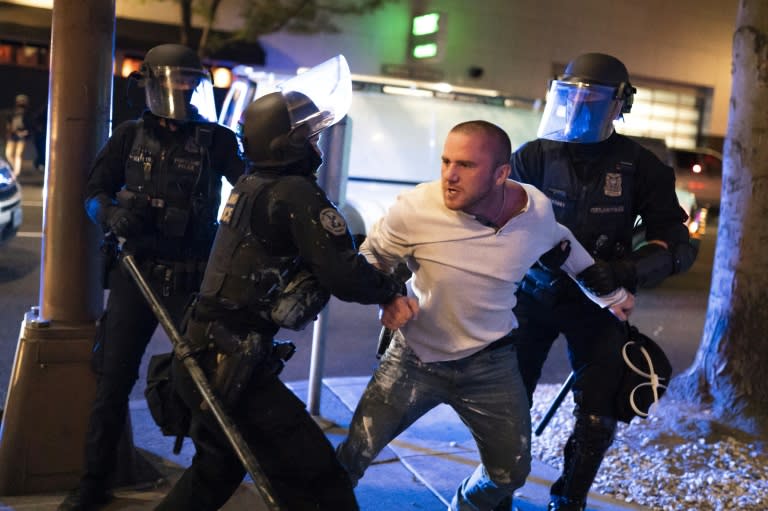 10-79 is the 10 code used in Portland, OR, for ending your shift. 10-79 is also heard at the end of memorial services for officers that have lost their lives while on duty.

2020 has been a rough year for officers of the Portland Police Bureau. The image of a dumpster fire should appear on the City of Portland Seal, and on city stationery. The city motto should be changed from “The City That Works” to “The City That Shirks.”

What is happening in policing, especially in Portland, is heartbreaking. Though it is not any better in cities outside Portland. I’m old-school when it comes to loyalty. Loyalty means supporting honest policing. Perhaps I’ve seen too much on the streets, and what matters to me is supporting officers that have seen what I have seen.

The Seattle City Council just approved a 20% cut to the department’s budget for 2021. And now, “Seattle Police search for common ground with Defund movement leaders“:

The move to strip down the Seattle Police Department was driven in large part by the community coalition known as King County Equity Now. On Thursday night, KCEN representatives joined an online conversation with a number of police officers who wanted to put a face on who it is that’s actually being defunded.