Of course, THEY will never eat crickets, and they will never fly Zipair Tokyo.  For now, it’s an option you have to special order, but bug food start ups are all the rage in Asia these days. Preview Open 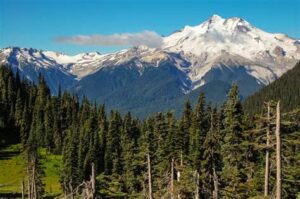 In Washington State, we have a number of dormant volcanoes in the Cascade Range, including the famous Mount St. Helens, Mt. Rainier, and Mt. Baker.  However, the most dangerous today is the little-known Glacier Peak in the north part of the state, northeast of our home in Everett.  The volcano is known to have erupted just 2,000 years ago, and even today it sometimes emits steam.  Seismologists place electronic monitors on dangerous volcanoes and then watch for clusters of little earthquakes that may signal an impending eruption (that was what happened in 1980 with St. Helens).

Recently, the US Forest Service was processing a request from local seismologists to install more monitors on Glacier Peak, described as the “most dangerous of Cascade volcanoes”, than just the one that has been there for years.  Glacier Peak is located in a wilderness area, and is not accessible enough for tourists to visit.  There were actually objections to the new monitors being placed on the mountain.  Who, you ask, would object to seismic monitors that might save thousands of people from being buried in volcanic mud in an eruption?

The objections came from the usual suspects-environmental groups who object to the helicopters that would be needed to carry scientists to the mountain to place the new monitors.  They always and everywhere object to helicopters in their precious wilderness, for any reason, even for the very short time it would take to install the monitors.  The “environmentalists” value the wilderness more than the many lives of people living in the affected area, and more than the scientists (real scientists!) who keep track of potential volcanic activity to protect the public.

The big news story this week was the appearance of the fetching Cassidy Hutchinson before the January 6 select committee, which somehow put us in the frame of mind of “Cassidy” by the renowned poetic duo of Weir/Barlow:

Lost now on the country miles in his Cadillac
I can tell by the way you smile, he is rolling back [to the West Wing]
Come wash the nighttime clean
Come grow the scorched ground green

Join Jim and Greg as they welcome the second amendment conversion of a New York liberal who now sees the value of a gun for self-defense and how restrictive laws don’t keep weapons away from bad guys. They also cheer the news that many environmental activists are packing up and leaving D.C. after Thursday’s Supreme Court decision on the EPA. And they sigh as President Biden tells Americans they will be stuck with high gas prices until Ukraine defeats Russia.

Jim & Greg cheer on the Supreme Court decision that voucher programs must include religious schools if they include private schools. They also slam President Biden over his suggestion that high energy prices are getting us closer to his green energy agenda goals. And they condemn Missouri GOP Senate candidate and former governor Eric Greitens crazy RINO hunting ad.

Rob Long is in for Jim. Join Rob and Greg as they cheer the energy industry bluntly rebutting President Biden’s pathetic demonization of it by laying out how production, refining, and pricing actually work and how Biden’s vow to end fossil fuels is directly responsible for skyrocketing energy prices. They also slam Michigan Gov. Gretchen Whitmer for trying to derail school voucher options for parents. And they look at the left’s creepy war on pregnancy centers.

Emily Jashinsky of The Federalist is in for Jim Geraghty. Join Emily and Greg as they recoil at the radical pro-abortion group Jane’s Revenge taking responsibility for many violent attacks on pregnancy centers in recent weeks and vowing to be even more aggressive. They also sigh as new polls show Dr. Oz deeply unpopular among Pennsylvania voters – just as some of us warned. And they hammer the Biden administration’s latest lame narrative for high gas prices – the oil companies just aren’t patriotic enough to lower prices.

I was walking after dark last night. Some deer ran across the road and then a Barred Owl flew into a tree ten to fifteen feet from us. Both my wife and I ducked. I’ve never seen an owl in this wild this close.  Mr. Owl was there for a couple of minutes before he […]

Join Jim and Greg as they dissect the breaking news of a man arrested near Justice Brett Kavanaugh’s home with the intent to kill him. They also cheer as San Francisco voters overwhelmingly recall pro-criminal district attorney Chesa Boudin and Los Angeles voters advance Rick Caruso to the general election. And they shudder as the World Bank projects a very rough economy for the rest of the decade. Meanwhile, Michigan Sen. Debbie Stabenow shows how little she cares about soaring gas prices.

I saw this little item this morning: https://redstate.com/kiradavis/2022/06/06/eus-new-climate-change-tax-will-exempt-private-jets-n575408 Preview Open

Join Jim and Greg as they’re glad to see Americans overwhelmingly worried about inflation and gas prices and planning to vote based on those issues. They also react to Rachel Wolfe’s nightmare journey from New Orleans to Chicago and back in an electric vehicle and what it tells us about how Dems are trying to reorganize our lives. And they discuss the Pennsylvania Senate race, as Dr. Oz officially wins the primary and John Fetterman gets caught downplaying the seriousness of his heart condition.

Join Jim and Greg as they shake their heads at Interior Secretary Deb Haaland’s inability to say whether gas prices are too high. They also groan as failed former New York City Mayor Bill de Blasio plans to run for Congress. And they react to news that many schools are not even spending funds from the COVID relief bill – which is one of the factors behind our inflation crisis.