To what extent should the Republican party be organized behind “MAGA” principles? Henry Olsen joins Heritage President Kevin Roberts to analyze the current state of the GOP and what we can expect from an already tumultuous 118th Congress.

With the World Series knotted at 2-2, and the mid-term election just days away, it seemed the perfect time to catch up with Henry Olsen, the premier psephologist (trying saying that word fast just once, never mind seven times) of all things data-related when it comes to politics—and also baseball. We disagree about the decision to remove a starting pitcher working on a no-hitter into the 7th inning of a World Series game, though Henry makes a strong case that the numbers totally justified the drama-killing decision.

Our main subject, though, is the general scene for the mid-term, and some specific polling puzzles that have been much on my mind. Henry thinks a Republican wave is coming in general, but whether medium-sized or huge (or, as I present the choice for surf-literate Californians, a Mavericks-size wave, or a Zuma Beach-sized wave) is still uncertain to Henry, though he’ll declare himself Monday afternoon when his detailed biennial pre-election predictions will go up at the Washington Post. Be sure to tune into his Twitter feed on election night, as it will be the best spot to get the most accurate and timely race-by-race analysis and early calls.

What do baseball and politics have in common? I have no idea, but Henry Olsen does. Actually, the kinds of data measurements we use in baseball can be applied to politics as well, and few do it better than Henry. So in this “classic format” episode, we talk about why President Biden is just biding his time in office, having squandered his election by mis-reading the public mood, and how this may very well tip the off-year gubernatorial elections in Virginia and New Jersey to Republicans, as it did in 1993 and 2009, when, in what has become a recurring pattern, Democrats overreach.

Then we talk about baseball—in particular the decline of starting pitchers and .300 hitters, and the rise of the so-called “bullpen game.” Give me those old 20-game winners like Jim Palmer and .325 hitters like Rod Carew and Pete Rose, please.  But you’d expect this from a reactionary like me.

Washington Post Columnist and author Dr. Henry Olsen joins for his second episode of the podcast to discuss a new poll he co-authored aimed at understanding Republican voters’ priorities and preferences, and how the GOP can overcome its internal divisions. 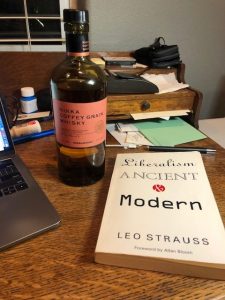 Better late than never, “Lucretia” and I team up to review what’s going on in the news along with drinking to the confirmation of Justice Barrett, but are most interested in thinking a bit about what is “metaphysically” wrong with the election scene, with poll after poll showing a solid Biden lead against lots of sense perception—and several historical examples—that argues for a different outcome. And so this became a crossover episode of the podcast, since I decided to pin down Henry Olsen, who I abuse for starting a competing podcast (ahem), and for his corrupt views about European “football.”

We did our best to refrain from too many #MeToobin jokes, but Chelsea Handler’s stunning echo of Joe Biden (“if you don’t vote for me, you ain’t black”) that we play right at the beginning is pretty revealing of the bedrock identity assumptions of the left these days. Talk about losing your grip.

Here’s my new podcast with Henry Olsen on democratic phenomena–vast increases in turnout in recent elections, which we expect will shock people in 2020, parties and administrations that cannot get a hold of their coalitions, much less represent them, and the entire shifting political landscape.

This week Steve Hayward hosts Henry Olsen going through the inside baseball of the unfolding Democratic presidential primary season, but also the inside baseball about . . . baseball! Did you know that the Houston Astros colluded with the Russians and Ukrainians to steal the 2017 World Series! So runs the allegation, with hearings no doubt to follow. In any case, Steve actually stumps Henry by recalling the slowest relief pitcher ever, Don “Full Pack” Stanhouse. (And when it comes to reforming baseball to make it great again, Henry has  a simple proposal: make the fielding gloves smaller. You’ll just have to listen to learn his reasons why—I’m not giving it away here.)

But the main event of this episode is the Democratic field, with new entrants Deval Patrick and Michael Bloomberg. Henry says to keep an eye on Patrick. We also preview the upcoming British election, which Henry will attend and report on for the Washington Post. The election is setting up as a proxy for Brexit, and Henry expect the Conservative Party and Boris Johnson to do very well. But we’re still almost a month off from the election, so stay tuned.

Dr. Henry Olsen, a senior fellow at the Ethics and Public Policy Center, discusses his book The Working Class Republican: Ronald Reagan and the Return of Blue-Collar Conservatism. Dr. Olsen makes the case for #40 being a “New Deal Conservative.”

I’ve decided that “populism” is when the wrong person or party wins a democratic election. Certainly the way the media and liberal elites have reacted to the Liberal Party’s upset win in Australia bears this out (keep in mind that the Liberal Party in Australia is the conservative party, but what do you expect from a country in the southern hemisphere). The media horror over Australia has been short-lived however, because the populists look set for major gains in the European Parliament elections currently under way. The wipe out of the Brexit-fumbling Tory Party in Britain has at last cost Theresa May her job, and the prospect of Boris Johnson becoming the next prime minister is Freddy Kruger territory for the media, who are also upset that India’s voters decided to return the retrograde pro-American Prime Minister Modi to office by a landslide. What’s a liberal elitist to do?

Well, one thing a liberal elitist ought to do (but probably won’t) is listen in to Henry Olson as he explains what’s going on. No one knows the data better than Henry, and I got him to give us his expectations and predictions for what’s next, including why Jeremy Corbyn will never make it, but why Joe Biden just might. Plus there’s a little baseball and soccer banter at the end, to send us off into our Memorial Day weekend.

Have you had enough of the Mueller Report? Done smoldering over Smollett? Jazzed at opening day for MLB? Then have we got the show for you! This episode features a conversation with Henry Olsen about the lessons of the 2018 midterm, how the Democratic presidential field for 2020 is shaping up (with lots of mockery of course), a genteel argument about Henry’s views about why conservatives should rethink their reflexive support for the electoral college (an admission scandal of a different kind, you might say), and finally a tour of the new season of major league baseball, with Henry’s handicap of the teams that made the best moves. Plus a psychological diagnosis of Clayton Kershaw’s post-season troubles, and whether the Nationals will prosper without Bryce Harper. Something for everyone!

Our new political podcast episode, as always, is on the political corruption of the elites. This time, we’re looking at recent elections and the major trends that have led to populism. We have elites who don’t want to represent the electorate. This will not end well, but it will end.

We’re up early with this week’s edition of the Power Line Show, because Steve Hayward (his voice finally back to about 90 percent) cornered Henry Olsen to get Henry’s Jedi-like outlook on the mid-term election next week. Henry’s not ready yet to make many specific calls—his detailed race-by-race forecast will go up at National Review Online this Sunday night or next Monday morning—but right how he thinks it looks good for the GOP in the Senate, close in the House, and bad for governorships. As a special bonus, we end with a few of his sensible thoughts on how to improve major league baseball.

(Bumper music this week: “Why’d You Only Call Me When You’re High?” [something we ask ourselves just about every time we call Henry Olsen] by the Arctic Monkeys, and “Rosalee” by the Chris Robinson Brotherhood.)

This week’s episode of Banter featured a double-dose of Ronald Reagan. Henry Olsen, senior fellow at the Ethics and Public Policy Center, and Craig Shirley, author of four bestselling books on President Reagan, engaged in a conversation on Reagan and his legacy. Both have recently published books on Reagan: Olsen’s The Working Class Republican: Ronald Reagan and the Return of Blue-Collar Conservatism and Shirley’s Reagan Rising: The Decisive Years, 1976-1980, offer different interpretations of President Reagan’s conservatism. They discussed their views at an AEI event which also featured a discussion on the future of the Republican party. The link below will take you to the full event video.

Below, Bill Whalen calls the race for Hillary. If, like me, at this hour you’re attempting to tamp down your final hopes, stick with Bill’s prediction. But if instead you’re looking for ways to keep your hopes alive, Henry Olsen has just obliged, posting a piece over at National Review suggesting that the race is very close–and that Trump might still just pull it off.

We caught up with Henry Olsen on the eve of the GOP convention in Cleveland to discuss the shape of the race right now, and the prospects for a return of ticket-splitting in down-ballot races if Trump loses. Also, one more victory lap for the fabulous Brexit vote, with a look at the surprising fallout in the British government under new PM Theresa May

While combing through the rubble of the Republican party …  and conservatism … and America … I turned today to the great election observer Henry Olsen for some insight, common sense and inspiration — and I got them! Even I’m impressed. A really good interview.

Who can make the connection between an obscure and bizarre British kids TV show and contemporary U.S. political analysis? The Power Line Show, that’s who! “Henry, were helping Henry and were telling Henry everything we know, Henry, were helping Henry, but we’ve still got a long long way too go!”—is the refrain of “Helping Henry,” but in this episode, Henry Olsen of the Ethics and Public Policy Center helps us keep up to date on the latest tea leaves of the political scene.

In our regular bi-weekly checkup with Henry Olsen, the Obi-Wan Kenobi of election analysts, Steve Hayward and Henry cover the fallout from the special election in House district 18 in Pennsylvania, how the tariff issue might play out, what to expect in the aftermath of the recent chaotic Italian election, plus a look ahead to November, including some of the key governor’s races like Bruce Rauner in Illinois. And finally, is there any hope for Republicans in California? To find out, you’ll have to listen to the end.