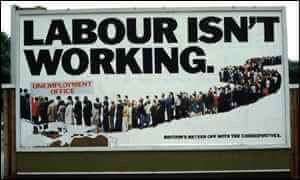 Riding in an over-crowded and under-airconditioned subway this morning, I realized that state and city budget cuts, combined with persistent high unemployment are making for an American version of Britain’s 1978 “Winter of Discontent,” which produced this brilliant, game-changing poster by Saatchi and Saatchi.

This poster helped propel the Tories to power (Claire: back me up here). It’s hard to beat “Labor isn’t working,” but let’s try. How about pictures of unemployed workers with the caption “Congress Isn’t Working, Either.” Or maybe Obama on a golf course (“Obama Isn’t Working.”) Or pictures of idled oil rigs with the caption “Your Tax Dollars At Work.”

I’m sure the rest of you can do better – bring it on!