One of the patron saints of the Democrat party, Greta Thunberg, Tweeted the following in December 2019:  “I’m sometimes called “political”.  But I’ve never supported any political party, politician, or ideology.  I communicate the science and the risks of failing to act on it.”  So she’s not political – she’s just trying to save the world.  Just like the anti-second amendment David Hogg seeks only to save lives, and is not interested in politics.  Right.  Ok.

Many leftist organizations use similar techniques to deflect criticism.  The NEA (National Education Association) is typical in this regard – check out the screenshot of their homepage.  They’re not political.  They just care about the kids.  How nice of them.  Of

course, now that CRT (Critical Race Theory) has become a hot-button political issue, the NEA has taken a stand on this divisive issue.  They recently approved a plan “to “publicize” critical race theory and dedicate a “team of staffers” to assist union members looking to “fight back against anti-CRT rhetoric.”

Just in case you remain unconvinced that NEA is a purely political organization, their recent resolution also “calls for the union to “join with Black Lives Matter at School and the Zinn Education Project to call for a rally this year on Oct. 14 — George Floyd’s birthday — as a national day of action to teach lessons about structural racism and oppression.”  This should make clear the point that the NEA is little more than a political organization.  The presence of the Bidens at the NEA meeting should clarify that as well (see picture below).  The NEA teaming up with Zinn and BLM should also make clear which side they’re on.  And it’s not the American side. 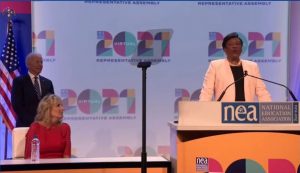 If the NEA is based on educating children, you might wonder why they’re teaming up with organizations like Black Lives Matter, for a rally on George Floyd’s birthday.  How does this promote the education of children?

What do the NEA’s colleagues at Black Lives Matter and the Zinn Education Project have in common?  They are often viewed as fundamentally anti-American.  And the NEA hopes to organize a joint rally with these organizations on George Floyd’s birthday.

So here we have the President of the United States present at the meeting, and cheering on the president of America’s largest teachers’ union, as she announces a plan to team up with two openly anti-American organizations to stage a leftist political rally.  Does your blood not run cold?

The president of the NEA (Who, you probably will not be shocked to learn, is a black woman – can you imagine them electing a white male?), Becky Pringle, has this quote on the NEA homepage:

We didn’t just survive this year … We learned.  We grew.  We lifted up our voices and took action in ways that demonstrate our individual and collective power.   – Becky Pringle

Ok.  So the union members of the NEA took action and demonstrated their collective power.  Great.  What about teaching children how to read and do arithmetic?  Did they do that?  You might think that Ms. Pringle would mention that.  If that was an important part of the NEA mission.

Their website features a picture of the NEA president in a classroom with a group of smiling children.

Ha!  Just kidding, of course.  The only picture of the NEA president on their website (the mobile version, at least) features her at a political rally, shouting at people through a megaphone, Al Sharpton style.  The caption reads, “Advance justice with us.”

This is pure radical leftist imagery.  Imagine Mitch McConnel shouting at people through a megaphone – that would be “Republican attacks with hateful rhetoric.”  But when a black woman does it, she’s “Advancing justice.”

This is pure radical leftist imagery.  Featured prominently on the NEA homepage. 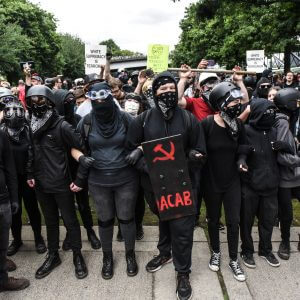 So these supposed “advocacy groups” like the NEA, Black Lives Matter, the environmental movement, the anti-second amendment movement, and so on – as they seek to use government power to advocate for whatever they promote – they naturally move further to the left (which wants increased government power) and further from America (which limits government power).

So advocacy groups, over time, tend to become anti-American.  So there you go.

Does your blood not run cold?