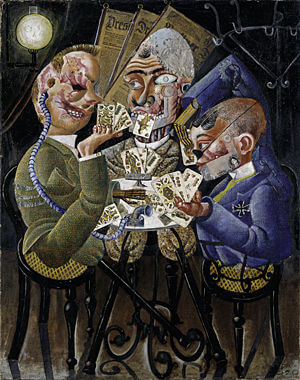 Above: Inci Eviner, “Harem,” 2009. (This is a still from the original work, which is a video installation–and a masterpiece. You can watch it here.)

It’s fascinating to see the way people responded to my question about Weimar cities. I find this question–about the relationship between a certain kind of political instability and a certain kind of creative efflorescence–extraordinarily interesting. Something struck me: People have immediate, instinctive responses to the word “Weimar,” and their responses say quite a bit about the way they view the contemporary world. I posted a similar question on my Facebook page, and here were some of the comments people left:

… Vienna, Rome, Paris, Moscow/Petersburg, Constantinople–all connected by the veneer of official and/or artistic displays of prowess that ineffectively mask the real chaos on the streets and in the minds of individuals.

… This is a remarkably fascinating question. I think you’ve actually hit a kind of universal typology. I think that many of the crises of civilization probably follow this pattern. Their vibrant culture actually intoxicates them from seeing or believing the impending doom. Perhaps Constantinople before the invasion of 1204? Many of the cities of east asia and eastern europe before their fall to communism?

Claire: … “The veneer of official and/or artistic displays of prowess that ineffectively mask the real chaos on the streets and in the minds of individuals.” This could almost be a definition of AKP governance–the proudly renovated Ottoman fountains, very pretty to look at and always adorned with a lavish sign saying “Renovated by your AKP municipality,” none of which actually convey water. Or the billion-page, slick “Earthquake preparation” plans that when closely examined are revealed to have nothing to do with any preparations actually made.

… Chilling idea in general; something does seem to be slouching towards Bethlehem.

… This is an interesting dicussion. It is strange that this group seems to see Weimar art and culture as marked by hypocrisy. Of course the right wing saw it that way (decadant, cosmopolitian, international, experimental, not sufficentaly tribal or nationalistic) but many see it and saw it as vibrant. Vienna 1900 was somewhat the same and this is the place that Einstein, Freud, Schnitzler, Klimpt, etc came out of. Perhaps dynamic vibrant culturaly mixed places are heightened by the sense of impeding doom or perhaps they are just very, very vulnerable.

… OK, I’m going to revote for Moscow 1917 and the Gov’t of Kerensky. Versailles 1789. Baghdad 1258? Constantinople 1453. Rome 410. Ctesiphon 637. Connect the dots and call it the “end of civilization” I could see it going as a broad historical phenom or as a modern phenom depending on whether you want to focus on the weakness of democratic regimes and the disintegration of culture or whether you want to do the ennui of the rich and civilized in the face of barbarism.

Claire: I’d like to take the discussion further from the (interesting) topic of “Which other cities were like Weimar Berlin” and more toward, “What were the distinguishing characteristic of Weimar Berlin.” Thoughts? I’m thinking of the unleashing of social and political imagination, the fascination with sexual adventure, the popular activism, the Utopianism, the feeling of life as something particularly intense and concentrated … the animation of artistic life by the confrontation with modernity; the death of the old world of princes and emperors; the end of the agrarian economy and peasant farming; the end of rigid class distinctions … the shift in the political center of gravity to the city, the cacophony of sounds and images, the artistic obsession with industrialization, the tensions and excitements of mass society, the new forms of artistic expression to which this awareness gave rise—abstract art, dissonant music, the architecture of clean lines, the heady enthusiams, the vibrant, kinetic energy … and obviously anyone who lives in Istanbul now will recognize these themes. More ideas?

… I think of a far less romanticized account: materialistic mobocracy, Bismarckian-statism, daily political assasinations and bombings, Ludendorff smoking a cigar with von Hindenburg as Germany declines, grotesquely vulgar naturalistic novels, compulsory intellectual uniformity, a trillion Marks to buy a slice of bread, meaningful national humiliation, as well as a grinding impoverished existence. I also think of the American Dawes and Young plans which saved the Germans from their awful economic calamity as well as at long last sanctioned their economy to breathe once more. Intense Anti-Semitism also comes to mind when I think of Weimar Berlin.

Interesting, no? This has me wondering: Was Weimar art in fact decadent, as the Nazis claimed? Can we predict the doom of a culture by looking at its artistic life? Or is the condemnation of Weimar culture the mark of the modern reactionary, in the full negative sense of the word?