Actually, the latter topic is much more pleasant than the former two, so let’s start with the Muppets. The Rainbow Connection was the theme song for The Muppet Movie, back when there was only one Muppet movie and the title could afford to be general. Kermit the Frog is sitting in a swamp playing a banjo singing that song. A hopelessly lost talent scout wanders by; Kermit corrects his path. In return, the talent scout tells this frog he may have a chance in Hollywood. And so Kermit sets out on a journey.

Why are there so many songs about rainbows? What’s on the other side?
Rainbows are visions but only illusions; rainbows have nothing to hide.

When I was nine or ten I had an adverse reaction to some kind of cough syrup. Ambroxol or something like that. You haven’t heard of it? Neither has anyone else. I got it in a clinic in Bolivia of all places and I don’t think the stuff is even sold in these United States. But I had a reaction to it once and it’s in my medical records now.

So we’ve been told and some choose to believe it;
I know they’re wrong; wait and see

I went in for surgery the other day; without getting into the gruesome details I’ll say I’m down one gallbladder, that I wasn’t faking it, and that I’m doing much better now, thanks for asking. Here, let me show you my fancy bracelet. I kept it on for a couple of days so I could get back in without paying again. 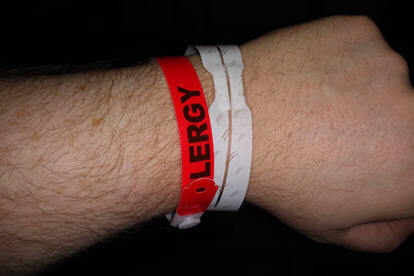 This tells you either that I have an Allergy or am Clergy; it’s hard to tell thanks to the poor design. We can be reasonably sure I haven’t been dabbling in Metallurgy.

Someday we’ll find it; the Rainbow Connection
The lovers and dreamers and me!

You can see I’ve got a ‘lergy. They gave me this bright red bracelet to let one and all in the surgery know that I have a potential reaction to a drug that’s completely irrelevant to the complaint. A drug of which I’d wager there’s not a dose within a thousand miles of me anyhow.

Who said that every wish would be heard and answered
Wished on the morning star?

This is bringing me around to the third topic here, which is regulation. The usual ways this goes I’d be complaining about FDA approvals because that drug isn’t around, or the legalities that require that bracelet where the fail condition is such an unlikely scenario, but the truth is I’m just waiting for the bit to come around in the song.

Somebody thought of that; someone believed it
Look what it’s done so far.

There we go. That’s the point of it all; a piece of information isn’t just a piece of information. Its weight is multiplied by the number of people who know it. Both the someone who thought of it and the someone who believed it. Every time I go over my medical records these days I have to talk about this stupid drug and why they’ve never heard of it. In theory, drug reactions are important information. In this case, it’s just a time-waster. My time, the nurse’s time, and the surgeon’s time.

What’s so amazing that keeps us stargazing?
What do we think we might see?

When you lay down a regulation — any regulation, however salubrious — just having the regulation doesn’t fix the problem. Let’s say you’re putting an upper limit on how much copper sludge a company can dump into the river. Somebody thought of it, but someone also has to believe it. The regulator has to think up the regulation. The company has to know the regulation is there. If they don’t know about the regulation it can’t have any effect. And then you also have to check. Someone has to keep an eye on them to make sure they’re following it.

Someday we’ll find it; the Rainbow Connection
The lovers and dreamers and me

The trouble here is that little costs add up. Think of it like packing a backpack. Do you want that extra pair of socks? They weigh nothing at all in your hand, but three hours on the trail and you’ll be able to measure their every microgram. Okay, but having clean socks after a long hike is probably worth it. The point of it is that those hours on the trail force you to think about your weight budget in a way that your dresser never does. Little costs add up.

The cough medicine allergy is in my charts; the surgeon had to read it and understand it long enough to dismiss the concern. The surgeon with the knife sees the bracelet, and he has to stop and remember about that drug that doesn’t matter. It takes him an instant and he’s back on the job, but I don’t want my surgeon having to hesitate that instant.

Have you been half asleep? Have you heard voices?
I hear them calling my name

None of this is a criticism of the surgeon (who did an excellent job), or the hospital procedure, or even the anesthesiologist. (Despite where the song is lining up I was completely out of it for the entirety of the knifing.) I want the surgeon aware of potential allergic reactions, even ones that are pretty darn unlikely to come up. Maybe it’s never gonna happen with me. Maybe it will make a difference on the next patient. The point isn’t that these costs are never worth paying, it’s that we ought to remember that they exist at all.

Is this the sweet sound that calls to young sailors?
Can they be one and the same?

Really we’ve seen the whole story. Even when they solve real problems every regulation we add to the books causes problems, the minimum being that we now have more regulations to remember and abide by. Let too many of these problems creep up, bind together, and agglomerate and you end up with a tax code that’s too large and complicated for any man to actually understand. And even then it isn’t just one person’s problem; it’s multiplied by the regulator, yourself, your accountant, and your auditor.

I’ve heard it too many times to ignore it
It’s something I’m s’posed to be
Someday we’ll find it; the Rainbow Connection
The lovers and dreamers and me!

Published in Healthcare
Tags: Allergic Reactions, everyone else is just here for the Muppets too, Healthcare, It's okay, Kermit the Frog, Muppets, Regulation, surgery