President Biden has taken up the slogan “Saving America’s Soul,” and he just might believe he is the savior. “Empathizer-In-Chief,” “Uniting America,” and “Bringing America Back” are all catch-phrases he or his ardent supporters have used to contrast the current President with the last. But even if he believes these things, half of Americans see an entirely different landscape. They haven’t been called into the battle for a common cause, or even if it still exists: that of an America strong in her convictions, of an America that stands for the life and liberty of all who take comfort under the folds of her flag. 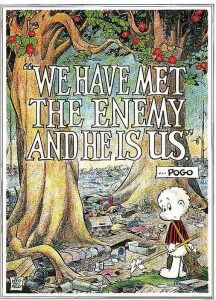 President Biden is correct that the widening chasm between Americans of differing political groups is developing into a war for America’s soul and he would be correct to assume it is a war that must be fought, even as a peripheral battle, have been raging for decades. As politics takes on a pseudo-religious zealousness, some might say it is a Holy War between two countering sides. But this war for America has quickly turned into a new Civil War that, much like the war waged under President Abraham Lincoln, will determine the direction of this nation for generations to come.

America is very adept at fighting and winning wars when a definite, hostile enemy is identified and targeted. We should take pride that we are the back-to-back World War champions and not a half-century later led the effort that defeated the communists. But when the conflict is directed inward, America struggles. Those are historically the hardest, bloodiest, wars, taking great emotional tolls that leave scars for decades. The wavering uncertainty in Korea, the political and cultural infighting of Vietnam, the subject of the Civil War itself – all of these things pulled at the braces of American cohesion, unmooring a will to certain, decisive victory. From these fights, like the battered, weary soldier, the physical scars heal faster than the psychological ones and the psyche of the American mind has suffered under the accumulation of self-flagellation and cultural masochism.

The optimism and sunrise promises of the 1950s and early 1960s gave way to the social strife and bad clothes of the late 60s and seventies. In the modern political era, the Carter years ushered in a bleak desolation. Stagflation was light on the lips, with the only chaser being President Carter’s infamous battle with a demon-like swamp rabbit. But the country managed to find pride and self-confidence in it’s a multi-front war helmed by a President that not only believed in unity, but the necessity of it for the survival of freedom around the world. Since then, the pendulum of introverted shame and has swung back and forth. First Lady Michelle Obama famously said she was never proud of her country until her husband was nominated for the presidency. She apparently had another change of heart, expressing her disappointment in her fellow Americans: “we are feeling what not having hope feels like” she told Oprah Winfrey in a 2016 interview after the election of Donald Trump.

But now, the stakes are even higher. We are well past the point of apologia or regret. We are being drowned in our own collective self-doubt, suffocating under the boot of our fellow Americans for whom regret and healing will never suffice. Under the guise of unity, Joe Biden has fed us humiliation. Under the cloak of healing, activists and radical progressives have pushed the boundaries of conditioned hate. It is no longer feasible to disagree with an opposing viewpoint: the Left will accept nothing less than total capitulation to their demands. Swear your allegiance, or be declared Enemy of the State. No debate, no discussion, no compromise.

In his 1970 poster for Earth Day, animator, cartoonist, and creator of the Pogo comic strip Walt Kelly coined the phrase “We have met the enemy and he is us.” The advertising campaign added to the idea of humans as a pest on Mother Earth. The leftists idolizing the Green Movement have used it as both a weapon against those on the right who consider humankind as simpatico with the caretaking of the Earth, and a shield against criticism of their draconian, oppressive, radical policies designed more for control than the protection of the earth. But that is just the beginning. The teacher’s unions have all but called parents who disagree with their Critical Race Theory agenda and lock-down forever wishes as killers. How dare parents question the manner in which their children are taught? In professional sports, not taking a knee for the National Anthem is akin to virtual lynching. Raising questions about where Black Lives Matter funds are distributed makes one a de facto racist. Defend the police? Racist. Even being outspoken about the exponential rise in violent crime gets your ticket punched on the condemnation train: 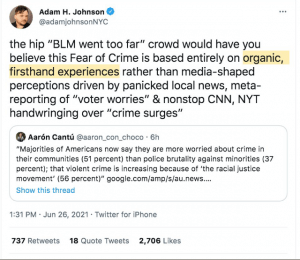 Benedict Arnold is gazing incredulously at the traitors to America as they dare raise the American flag. New York Times op-ed writer Mara Gay was triggered over Memorial Day weekend when she saw Old Glory, declaring those who fly it have a “racist message and that there needs to be a moment where white people need to separate whiteness from Americanism.” Olympic qualifier Gwen Berry, who turned her back during the playing of the National Anthem during her competition’s medal ceremony, displayed a similar sentiment. And the crowd who scoffed at Congressional colleagues wearing American flag pins after 9/11 now view advocating for election security and voter identification as “Anti-American.”

In what is the most egregious example of flipping the promise of a unified nation to the shredder is the failure of politicians to defend the attacks against the Jewish community. Any support of Israel is support for genocide, and it adds to the irredeemable nature of America’s core. Representative Ilhan Omar is the loudest voice unapologetically attacking anyone who disagrees with her views on Israel and American Jews. She keeps pushing the boundaries of her hate because she never suffers the consequences or pushback from political leadership. In fact, just raising the issue gets a venomous response from her or members of her squad, that usually entails denials of any anti-Jewish sentiment in America, especially from the Left, or worse, that anti-Jewish bigotry or violence is some controversy conjured up by Jews themselves. For her, no one has the right to talk about antisemitism unless you profess the primacy of oppression of her favored group. In an interview with CNN’s Jake Tapper, she doubled-down on equivocating terrorist states with Israel and the United States. She never fails to live out her brand of self-righteous bigotry. And here is it on full display.

Americans as a people are keen to the well-being of their neighbors despite exaggerated tales of a nation fiercely entrenched in a heartless state of independence and competition.  But we can be both. That is part of the beauty of America’s multifaceted character. We have Adam Smith’s “Wealth of Nations”, and also “The Theory of Moral Sentiments.” We have a duty to the cause of liberty, to the contributions from independent minds and ideas, and also to each other. In his 1643 book Religio Medici, Thomas Browne wrote, “Yet it is every man his own greatest enemy, and as it were his own executioner.” Conservatives are under attack, branded as enemies of a political narrative wanting America to be the Great Evil. We are indeed in a battle for the soul of America. We mustn’t lose sight of the magnitude of victory.