Why do I do this to myself? True to form, The Bulwark‘s Charlie Sykes has once again dismissed anti-critical race theory sentiment as mere paranoia:

These are more than scattered anecdotes, and do seem to indicate a trend — at least in a certain strata of schools. But how widespread is this sort of thing in less elite, posh, rarefied precincts? . . . As far as I know, nobody knows the answer. And nobody really wants to find out. The point of shark attack politics is not data — it is fear and outrage. And for outrage, anecdata is more than sufficient. Statistics are irrelevant, if the stories are graphic and alarming enough. So, even though the vast majority of Americans will never encounter anything remotely like CRT, it becomes a real threat and a potent political weapon.

Okay, Charlie. I, for one, do want to know how widespread critical theory is in schools, so I dove into the statistics on my home state of Ohio, that bastion of Trumpianism. I perused school-district websites and combed through press releases and newspaper articles. What did I find? Let’s see.

Ohio has 611 public school districts. Of these 611 districts, 111 — or just over 18 percent — have made some kind of public, institutional commitment to the cause of “diversity, equity, and inclusion” (or DEI, for short). These 111 school districts, overwhelmingly urban and suburban, educate about 724,000 students — roughly 46 percent of the state’s total student population. Moreover, 437,000 students (28 percent of the total) attend schools in districts with a dedicated DEI bureaucracy — that is, at least one district employee whose sole job is the creation and enforcement of DEI policy. Other schools lack dedicated DEI positions, but host DEI committees or working groups composed of teachers or administrators, or have begun DEI training programs for staff and students, or have made self-flagellating and yet undelivered promises to “do better” or “do the work” of anti-racism. 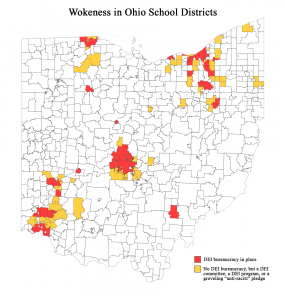 Precisely what form the DEI obsession takes varies from place to place. Grandview Public Schools, an urban district in metro Columbus, made its seventh-graders read Ibram X. Kendi’s Stamped. Cincinnati-area Mason Public Schools has a snitching tipline where students can report “acts of racism, sexism, ableism, classism, homophobia, religious intolerance, and other forms of harassment.” In April, Brunswick City Schools celebrated “Ally Spirit Week.” A suburban district near Cleveland (I wish I could remember which one, but alas) pledged to create an “inclusion questionnaire” to be used as a litmus test during hiring — no doubt to root out would-be dissenters. Most districts on the list hold “anti-racism” or “implicit bias” training for their employees, and some do the same for students. Some send administrators away on multi-day “social justice” retreats. Regional “anti-racism centers” or “diversity labs,” usually housed on university campuses, propagandize on behalf of districts without the means to build their own diversity bureaucracies.

But the problem is even worse than my data would suggest. I searched for wokeness at the district level. I didn’t research individual schools, and I didn’t even think about researching individual teachers. A corrupt school board can do enormous damage, yes, but the truth is that most school boards are merely catching up to the intellectual culture which already exists among the staff — a culture fostered at universities, which the public schools seem to be using as models. For every diversocrat, there are at least a few Cortney Ingrams — Twitter-addled classroom activists who take their students to protests or otherwise present critical theory as if God Himself had personally handed them the tablets on Mount Sinai. (Ingram teaches English at the middle school I had the great misfortune of attending.) It’s easy enough to throw out the school board, but good luck throwing out the teachers, counselors, coaches, principals, and administrators. Pass a law banning CRT, and the hordes of aspirationally woke virtue-signalers will simply teach around it. Even in rural districts, teachers are still the products of the schools of education. The younger hires have all been propagandized, at the very least. A few are sane, but many of them see their role as Wilsonian — bringing light to the Trumpy darkness by making the next generation as unlike their parents as possible. After all, wokeness is the governing ideology of the American elite, and the set of “principles that they regard as the source of their right to rule.” It is deluded, then, to expect them to abandon these principles merely because some 52-year-old mechanic in a MAGA hat yells “Marxist!”

And don’t forget about peer pressure! Even if no teachers are peddling woke nonsense, it’s likely that the students themselves are. Left-wing cultural politics has enormous cachet among people below the age of, say, 35. This is doubly true of gender ideology. Teenagers love to be approved of, and nothing generates more peer approval than assertions of woke purity. Try dealing with that via the political process, annoyed parents.

So, how widespread is critical theory in schools — not just critical race theory, but all forms of the ideology? Between the DEI bureaucracies and unpublicized wokeness snuck in by teachers and counselors and kids, I think it’s safe to say that at least half of the state’s students, and probably more, are exposed to it — and not just exposed to it, but taught it as a form of capital-T Truth.

Implicit bias, intersectionality, systemic racism, whiteness, white privilege, power structures, oppression, microaggressions, patriarchy, ableism, Latinx, “spaces,” “centering,” “voices,” the panoply of “queer” identities — these are all concepts which have trickled from the revolutionary academic fringe into the educational mainstream. Seldom, if ever, did I hear these words and phrases when I was in public school, less than a decade ago. (Leftism then consisted of Obama worship and shouts of “Yay, government!”) But today’s suburban or urban high-schooler probably hears them all the time. Not that Charlie Sykes cares. These DEI people stand athwart Trump, just as The Bulwark does, and that’s what matters most, right?

(School enrollment data from the National Center of Education Statistics.)