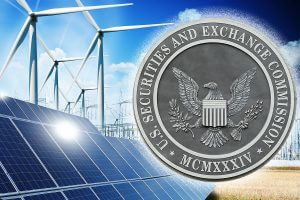 A huge fraction of the Biden administration’s regulatory policy is driven by its persistent fear of climate change. Chief among its initiatives are ambitious programs to reduce the United States’ dependence on fossil fuels by pushing for an increase in wind and solar energy reliance.

There are two paths for achieving that goal: direct regulation and disclosure. The former includes the decision made shortly after President Biden’s inauguration to pull the federal permits for the Keystone XL pipeline, which led TC Energy, its Canadian developer, to kill the project some months later. Soon thereafter, the Biden team made its dubious decision to “pause” oil and gas leasing on public lands and waters, only to be blocked judicially for encroaching on Congress’s power to set national policy. Ironically, there was no explanation given of how these actions would help the environment. In my view, Keystone’s removal probably increased climate-change risk by preventing the efficient shipment of fossil fuels, which are still used by over 80 percent of the energy market, notwithstanding the heavily subsidized production of wind and solar energy. Piously claiming to follow “best science” hardly serves as an adequate justification.

Nonetheless, it is ironic that just as the Biden administration falls short on its own disclosures, it is not shy about imposing onerous disclosure requirements on private parties. On March 15, Allison Lee, acting head of the Securities and Exchange Commission, made a public request for guidance about the proper corporate disclosures needed on climate change. Here are just two subparts of the fifteen questions she asked:

It would take a lifetime to answer all her questions. But now that the comment period is closed, here is my simple advice: abandon this ill-conceived project.

What is the purpose of the SEC disclosure regime? Generally, it provides public parties information that helps guide sound investment decisions. But just what kind of disclosures best serve this function? One cannot evaluate the SEC’s role against a background assumption that no information will be disclosed without some SEC mandate. The market demand for information on climate-related matters has “grown dramatically” and shows no sign of abating, as the SEC itself noted. Why not assume then that private firms will supply the needed information to better their market positions, as a group of conservative organizations has pointedly asked?

Past efforts to attack firms for their failure to disclose—or worse, active concealment—of relevant information have come up short. One notable example is the failed efforts to examine ExxonMobil’s accounting practices to show that it overvalued its oil reserves. During a lengthy campaign, its accounting practices were wrongly attacked as fraudulent for using “two sets of books,” without critics ever recognizing that this supposedly dubious methodology allowed for a more accurate valuation of particular projects as development plans moved forward. By December 2019, the champions of the “ExxonKnew” campaign faced a complete judicial rout of what Manhattan Supreme Court Justice Barry Ostrager called its “hyperbolic complaint.”

Fiascos like this hardly inspire confidence that the administration and enforcement of a more extensive set of proposals will supply investors with useful information. The standard justification for the requirement to disclose “material nonpublic” information is that the knowledge firms have about their own practices should be revealed to prevent business insiders from having an unfair advantage over the rest of the world. It was this impulse that led to the adoption of the SEC rule of Regulation Fair Disclosure in 2000, which sought to ensure that all market participants received the same information at the same time about pending market developments that could affect share value. Yet, as legal scholars Kevin S. Haeberle and M. Todd Henderson have argued, that rule probably reduced the total amount of useful information firms were willing to release—at least, relative to alternative schemes that consciously allowed firms to sell information to different groups at different prices. There are strong incentives to produce new information if it can be sold, and sales are not possible unless buyers receive an edge on the market, which cannot happen under a nondiscrimination rule.

The defects of the SEC request go deeper, for it is a mistake to assume that the major relevant source of information about climate change comes exclusively from private sources. The issue with climate-change disclosure is that the public already has too much information, not too little. Thus, the challenge is how to sort the wheat from the chaff in dealing with contradictory information supplied by both climate hawks and doves. Yet nothing says that the correct interpretation of any mix of private plus public information should lead to the adoption of worst-case scenarios regarding climate change’s impact.

Better and Worse Kinds of Information

To see the difficulty, consider possible disclosures regarding the effect of climate change on sea levels. The implicit subtext in the SEC’s order is that rising levels of carbon dioxide will lead to more rapid increases in sea levels. But in practice, much evidence points in the opposite direction. For example, water levels in the Great Lakes reveal a decidedly cyclical pattern, showing periods of relative stability followed by periods of large water-level shifts both up and down. The most recent upward trend of these for Lakes Michigan and Huron started in about 2014, but there are earlier spurts and falls around 1930, 1950, and 1970, when carbon dioxide levels were far lower than they are today.

Similarly, the many predictions about Lake Erie’s drying up have also proved false, in light of recent record increases in its water level. It is extremely difficult to think that any single input can drive these constant up-and-down patterns. Moreover, the one variable that surely cannot provide the full explanation is carbon dioxide, whose slow but steady increase cannot drive sea levels in both directions.

The overall climate system is, of course, far more complicated than these simple observations suggest. Firms that have global footprints will be hard pressed to integrate this public information with their own business plans, which are often subject to major uncertainties. No one in 2019 could have predicted how COVID-19 would have transformed the business fortunes of large corporations. Yet no sane investor would wait months for a firm to issue an annual disclosure. Instead, he would promptly make and then revise his own evaluations in real time from a wide range of sources.

The obvious lesson should be that any information about climate change is likely to depreciate rapidly in value. If these disclosure requirements extend beyond a very short time window, they are likely to prove worthless in light of the huge amounts of cyclical data. In the end, these disclosures will be rightly disregarded by the same investors the SEC is trying to assist. In his usual pointed way, the economist John Cochrane ridiculed this impulse toward grand theory, observing: “[B]anks did not fail in 2008 because they bet on radios not TV in the 1920s. Banks failed over mortgage investments made in 2006.” The SEC is using the wrong time frame by seeking information about climate change rather than accounting for the various short-term financial and political variables that are likely to matter far more to investors than long-term speculations that will be subject to constant revisions. The job of the current generation of managers and regulators is not to solve all of earth’s problems today. It is to do well enough to hand interim control over to the next generation some five or ten years later.

A Matter of Activism

It seems, therefore, that the information demanded in this case has an unstated collateral purpose: namely, to drive home, yet again, the impression that the climate crisis is real and imminent, thereby boosting the case for direct regulation. In addition, any information that is useless to investors will surely help outsiders attack corporations by claiming, for example, that they were misled by shortfalls in the climate statements.

Sound disclosure should help investors, not embolden critics. Yet the SEC’s disclosure programs have, over the years, seemed more concerned with the latter, like 2015 pay-ratio disclosure that requires firms to publish detailed information about the relationship between the earnings of top officers and the median employee. How this information helps investors estimate future performance is a complete mystery—a good CEO that brings on many low-paying jobs may help the firm and its workers. This disclosure merely gives ammunition to critics who think that corporate wage inequality justifies greater labor regulation and steeper taxation. Commissioner Lee’s new mandate looks to be yet another example of misdirected political activism.

Once, the SEC sought to use disclosure requirements to improve the functioning of capital markets. Now, sadly, it seems the objective is to expand the SEC’s direct meddling in their operation.