The major pandemic was the 1918 “Spanish flu,” the most devastating pandemic in history. The most “progressive presidency” was that of Democrat Woodrow Wilson and, some would say, his wife Edith, who is often credited for becoming de facto president following Wilson’s stroke that left him largely debilitated. The Klu Klux Klan was reaching its crescendo leading up to the 1924 Democratic National Convention, often referred to as the “Klanbake.” American soldiers were returning home victorious after World War I. Tulsa’s race massacre of 1921 resulted in hundreds of Black Americans being slaughtered and their community destroyed.

President Wilson, who hosted the first motion picture ever shown in the White House – the racist D.W. Griffith’s “Birth of a Nation,” a tribute to the KKK – also ordered the segregation of the federal workforce and the military (systemic racism). The major movements afoot to “improve the human condition?” There were two – Eugenics, supported by Wilson and led by Planned Parenthood founder Margaret Sanger, and Prohibition, which culminated in the 18th Amendment to outlaw the sale of alcohol. 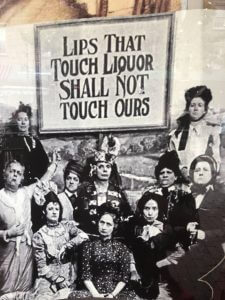 Progressives in Congress and the states – in control of both political parties – aggressively amended the Constitution. They enacted the 16th Amendment to authorize the income tax. Previously, the federal government relied heavily on tariffs to finance their activities. They enacted the 17th Amendment to provide for the direct election of US Senators, instead of relying on state legislatures, as originally provided by the Constitution. Seems the Senate suffered from some states’ inability to fill vacant seats.

And following the 18th Amendment, the 19th Amendment gave women, who were largely the driving force behind Prohibition, the right to vote. I’ll leave that one alone. The next amendments, the 20th and 21st, would not be adopted until 1933. The first would shorten the “lame duck” period between the election and inauguration of a new President, from March 4th to January 20th. And the 21st would repeal the 18th. President Franklin Roosevelt, in his first year in office, would celebrate with a dirty martini.

While we don’t have a flurry of Constitutional amendments, progressives today are demanding that the US Senate undermine its organizational purpose by eliminating the filibuster. Sanger’s Planned Parenthood remains alive and well as the nation’s largest abortion provider with most of its facilities located in predominantly poorer minority neighborhoods. And instead of banning alcohol, progressives are looking to ban other things: opposing ideas, free speech, and guns. As for improving the human condition, we also have Critical Race Theory that resembles the old racism of 100 years ago.

And progressives still claim that white supremacy is the biggest threat to America, ignoring more than 500 violent incidents and riots in 2020 in some 200 cities across the United States, most resulting from anarchists and others associated with Antifa and Black Lives Matter.

It may be a stretch – some will say it’s unfair – to compare early 20th Century “progressivism” with today’s. After all, progressives had leading roles in both political parties – it was bipartisan then, much less so today. Their home is clearly ensconced in the Democratic party. Of course, their ultimate argument will be that today’s progressivism hasn’t really been tried (just like Socialism. Uh-huh). And after all, it is progressives, less so conservatives who are working to legalize, not ban mind-altering substances like marijuana for recreational purposes (actually, it’s become quite bipartisan). Prohibition is so passé. 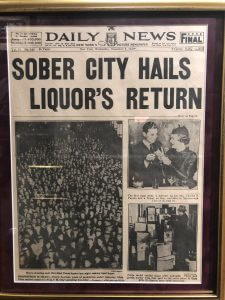 Prohibition had interesting supporters, which included Republican President Herbert Hoover, who referred to it as a “the great social and economic experience, noble in motive and far-reaching in purpose.” Mark Twain and Abraham Lincoln were both on record as opposing it, as did Democrat Franklin Roosevelt. Evangelical Protestants, personified by preacher Billy Sunday, were very supportive, as was industrialist Henry Ford. Axe-wielding Carry Nation would destroy dozens of saloons and be arrested, only to be quickly released (not unlike today’s Antifa actors). Side note: no trip to Savannah, Georgia is complete without a visit to the American Prohibition Museum.

But there are eery resemblances to the motivations and desires of progressives 100 years ago to those today. The desire to use government to “improve the human condition,” be it controlling people’s activities because of pandemics, “climate change,” banning guns, for other top-down mandates is ubiquitous. Then, as now, progressives believe that our nation’s experts should lead us to our utopia, as best personified in the 1977 movie, Logan’s Run, as described here.

“Every aspect of life is planned. Freedom is abolished in the name of the fairness and equality. People live only for continual, instantaneous self pleasure. All relationships except those between the Self and the State are viewed with suspicion or are made impossible. The only thing citizens can look forward to is death and “renewal”, wherein the dismal process repeats ad nauseum.”

Sure, Logan’s Run is fiction, as was its recent sequel. But read carefully the pronouncements of today’s progressive politicians. Tell me where it differs from this description of Logan’s Run. Remember the 2012 Obama campaign’s “Life of Julia,” which outlined government’s cradle-to-grave involvement in every aspect of her life?

When it comes to so-called progressivism, it sure looks like Ecclesiastes 1:9 from the Old Testament remains true: there is nothing new under the sun. And speaking of the Good Book, perhaps it remains the best means to “improve the human condition,” not secular progressives. After all, those who don’t learn from history are doomed to repeat it.