Mr. Greenblatt is the senior official responsible for providing oversight of more than 70,000 Department employees and assessing the Department’s diverse programs, which include roughly $10 billion in grants and contracts, $12 billion in natural resource royalties, 30% of the nation’s energy resources, Federal trust responsibilities to 573 Indian tribes and Alaska Native villages, and stewardship of 20% of the nation’s lands.

This report, which we anticipate is the first of a number of projects examining aspects of the events of June 1, focuses on what occurred from an operational perspective—namely, when and how the USPP, in coordination with its law enforcement partners, made the decision to clear the park, and how it developed and executed its plan to do so. Although we do not have oversight authority over the USPP’s law enforcement partners, we obtained information from them throughout our review, particularly when doing so would provide us with insight into the USPP’s own activities.

This report presents a thorough, independent examination of that evidence to assess the USPP’s decision making and operations, including a detailed timeline of relevant actions and an analysis of whether the USPP’s actions complied with governing policies. The evidence we reviewed showed that the USPP cleared the park to allow a contractor to safely install antiscale fencing in response to destruction of Federal property and injury to officers that occurred on May 30 and May 31. Moreover, the evidence established that relevant USPP officials had made those decisions and had begun implementing the operational plan several hours before they knew of a potential Presidential visit to the park, which occurred later that day. As such, we determined that the evidence did not support a finding that the USPP cleared the park on June 1, 2020, so that then President Trump could enter the park. [emphasis added]

Review of U.S. Park Police Actions at Lafayette Park
Create Date: Wednesday, June 9, 2021
Report Date: Tuesday, June 8, 2021
At the request of then Secretary of the U.S. Department of the Interior David Bernhardt and Members of Congress, we reviewed the actions the U.S. Park Police (USPP) took to disperse protesters in and around Lafayette Park in Washington, DC, on June 1, 2020. Our review focused on events that occurred in and around the park from May 29 through June 3 amid the ongoing Black Lives Matter protests. We sought to describe what occurred primarily from an operational perspective, including how and when the USPP, in coordination with its law enforcement partners, developed and executed its plan to clear the park and the USPP’s reasons for dispersing protesters from the area. We also sought to determine whether the warnings the USPP provided to protesters before it executed the plan complied with applicable guidance. We did not review as part of this project individual uses of force by USPP officers; these actions are the subject of separate inquiries or ongoing lawsuits.

Protests began in and around Lafayette Park on May 29, 2020. On May 30, the USPP and U.S. Secret Service established a unified command to coordinate the law enforcement response to the protests. From May 30 to 31, at least 49 USPP officers were injured while policing the protests, and Federal and private property was vandalized.

On the morning of June 1, the Secret Service procured antiscale fencing to establish a more secure perimeter around Lafayette Park that was to be delivered and installed that same day. The USPP, in coordination with the Secret Service, determined that it was necessary to clear protesters from the area in and around the park to enable the contractor’s employees to safely install the fence. The USPP planned to implement the operation as soon as the fencing materials and sufficient law enforcement officers arrived at the park. Six other law enforcement agencies assisted the USPP and the Secret Service in the operation to clear and secure areas near the park.

The operation began at 6:23 p.m. and was completed by 6:50 p.m. Shortly thereafter, at 7:01 p.m., President Trump walked from the White House through Lafayette Park to St. John’s Church. At 7:30 p.m., the contractor began assembling and installing the antiscale fence and completed the work by approximately 12:30 a.m. on June 2.

We found that the USPP had the authority and discretion to clear Lafayette Park and the surrounding areas on June 1. The evidence we obtained did not support a finding that the USPP cleared the park to allow the President to survey the damage and walk to St. John’s Church. Instead, the evidence we reviewed showed that the USPP cleared the park to allow the contractor to safely install the antiscale fencing in response to destruction of property and injury to officers occurring on May 30 and 31. Further, the evidence showed that the USPP did not know about the President’s potential movement until mid- to late afternoon on June 1—hours after it had begun developing its operational plan and the fencing contractor had arrived in the park.

We also found that although the USPP used a sound-amplifying long-range acoustic device to issue three dispersal warnings to the crowd on June 1, not everyone could hear the warnings. Furthermore, we found that the USPP does not have a detailed dispersal warning policy applicable to operations like the one that occurred on June 1 and that this may have led to the ineffective warnings issued to the crowd that day.

Finally, we found that the USPP and the Secret Service did not use a shared radio channel to communicate, that the USPP primarily conveyed information orally to assisting law enforcement entities, that an assisting law enforcement entity arrived late and may not have received a full briefing on the rules of engagement, and that several law enforcement officers could not clearly hear the incident commander’s dispersal warnings. These weaknesses in communication and coordination may have contributed to confusion during the operation and the use of tactics that appeared inconsistent with the incident commander’s operational plan.

Given the lack of a specific policy, we recommend that the USPP develop a detailed policy for protests and other events of the type that occurred on June 1 and improve its field communication procedures to better manage multiagency operation.

Glenn Greenwald, a real journalist, names names of the false propaganda peddlers in “Yet Another Media Tale — Trump Tear-Gassed Protesters For a Church Photo Op — Collapses.”

This tale was so pervasive in the media landscape that it would be impossible for any one article to compile all the examples. “Peaceful Protesters Tear-Gassed To Clear Way For Trump Church Photo-Op,” read the NPR headline on June 1. The New York Times ran with: “Protesters Dispersed With Tear Gas So Trump Could Pose at Church.” CNN devoted multiple segments to venting indignation while the on-screen graphic declared: “Peaceful Protesters Near White House Tear-Gassed, Shot With Rubber Bullets So Trump Can Have Church Photo Op.”

ABC News anchor George Stephanopoulos “reported” that “the administration asked police to clear peaceful protesters from the park across the White House so that the President could stage a photo op.” The Intercept published an article stating that “federal police used tear gas and rubber bullets to clear protesters from Lafayette Square in front of the White House,” all to feature a video where the first interviewee said: “to me, the way our military and police have behaved toward the protesters at the instruction of President Trump has almost been Nazi-like.”Nazi-like. This was repeated by virtually every major corporate outlet.

At a June 2 Press Conference, then-Sen. Kamala Harris (D-CA) proclaimed with anger: “last night I watched as President Trump, having gassed peaceful protesters just so he could do this photo op, then he went on to teargas priests who were helping protesters in Lafayette Park.” Speaking on MSNBC’s Morning Joe, House Speaker Nancy Pelosi exclaimed: “What is this, a banana republic?,” when asked about NBC News’ report that “security forces used tear gas and flash-bangs against a crowd of peaceful demonstrators to clear the area for the president.”

Meanwhile, The Federalist’s Mollie Hemingway — in an article retweeted by Trump as a “must read” — cited sources to assert that the entire media narrative was false because force was to clear the Park not to enable Trump’s photo op but rather “because [protesters] had climbed on top of a structure in Lafayette Park that had been burned the prior night” and the Park Police decided to build a barrier to protect it.

But as usual, the self-proclaimed Superior Liberal Truth Squad instantly declared them to be lying. The Washington Post’s “fact-checker,” Phillip Bump, mocked denials from Trump supporters and right-wing reporters such as Hemingway, proclaiming that a recent statement from the Park Police “brings the debate to a close,” as it proves “the deployment of security forces using weapons and irritants to clear a peaceful protest so that the president could have a photo op.”

The media, with very rare exceptions, lied as they had done since 2015 and as they continued through at least January 2021. Now they are performing modified limited hangouts on both the Wuhan lab virus and the Lafayette Park riot. Or, at least some are. We should not be surprised at the hold-outs. 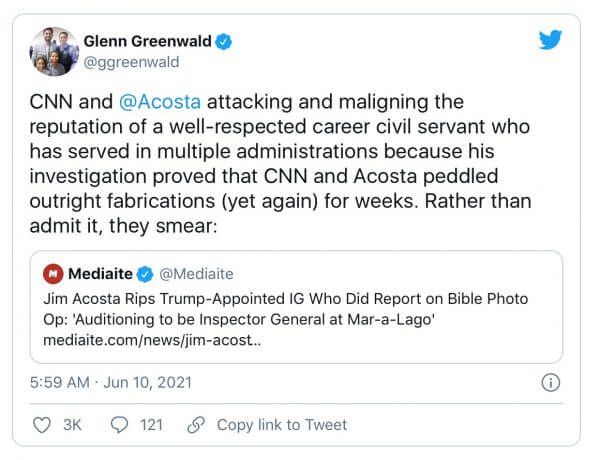 Phillip Bump generated an artificial fog of words to obscure the truth of his journalistic malpractice. John Sexton cut through this fake fog with the light of inconvenient truths.

Maybe Barr did go out there with the intention of giving the Park Police a nudge but if so it came too late to matter. The operation had already started. The more significant point, which Bump barely mentions, is that the whole media narrative about Trump clearing the park with tear gas for a photo op was false. Given how much effort Bump spent promoting that narrative last year, he could do better than burying the “compelling evidence” about what really happened 15 paragraphs into a piece about “lingering questions” that aren’t actually lingering.

The facts, only now given serious weight by the political establishment, were available from the earliest hours of both the plandemic and the false frenzy over a president of the United States walking through a public park in the nation’s capital after a national cultural treasure was damaged by arson connected with left wing street violence egged on or excused and minimized by leading Democrats.