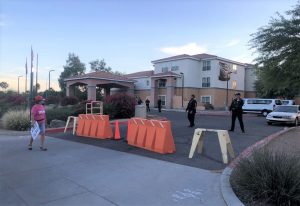 The precinct for Scottsdale’s Homewood Suites voted for Joe Biden, 51% to 47%. Today, this upscale Arizona neighborhood regrets its decision.

Two hundred residents protested Saturday after ICE took over the recently closed hotel to house more than 1,200 illegal immigrants. No public input was requested, not even from the Scottsdale Police Department, which was notified of the decision a day before migrants were transferred.

Government usually detains the undocumented in poorer neighborhoods where they’re more easily ignored by the media. But this zip code has nearly three times the state’s median income, making it harder to hide the ongoing border crisis.

“Over the Memorial Day Weekend, we were notified about the hotel and the illegals that were moved in under the cover of darkness without any kind of consultation from the local community,” protestor Lisa Seger said.

“My wife and I drove by last night and sure enough, they have armed guards and we have pictures taken by other homeowners unloading buses with people with backpacks into the facility,” said resident Geoff Gunsalus. “So we’re concerned that none of us have been put on notice. There was no due process.”

Angry neighbors soon learned their city government has no legal authority to override ICE’s decision. The facility is closed to the public and local journalists were denied entry.

Arizona Attorney General Mark Brnovich wants to get to the bottom of it. “The President is using Arizona as an experiment with his reckless border policies,” the elected Republican said. “I will continue to stand up for Arizonans and do everything I can to stop the Biden Administration’s attempt to abolish ICE. All of us will pay the price, not only with our tax dollars, but also with our national security, and the safety of our families.”

He demanded DHS provide details about the process, if migrants are being screened for diseases and criminal records, and cost to the taxpayer.

When the border is protected and the problem unseen, it’s easy to support lax enforcement and vague promises of “compassion.” Last fall, the Biden sticker on your Tesla earned approving nods from neighbors and you rest assured that you were on the side of the angels. Nine months later, you’re on a 108-degree sidewalk screaming “NIMBY!” and wondering why Democrats smirk as they drive by.

Politics is funny that way.