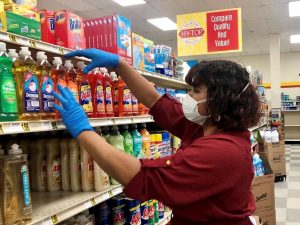 I’ve been trying to stay out of this. I really have. But just can’t help myself. I’ve read every possible opinion about preventing the spread of COVID using masks. Some people say they don’t work at all. Others say that they work extremely well. Others say they work, but they don’t work because you morons can’t use them correctly. And there are many other variations out there. I haven’t posted on this topic, partially because I don’t know what I’m talking about. I don’t really understand what just happened. So much of this makes no sense. But I can no longer restrain myself. Allow me to propose my own theory: Nearly all the theories I’ve read are wrong. All of them. Well, pretty much. In my view, at least.

The use of statistics in medicine is complex. There are lots and lots of variables, most of which are unknowable. Discerning the impact of a treatment from random chance can be tricky. We try to follow a wide range of studies, but they often don’t agree. But let me try to illustrate my point at first by moving away from masks, and talk briefly of heart disease. This will seem off-topic at first, but you’ll see where I’m going soon. And the doctors in the audience may catch me over-simplifying the data a bit. I’m just trying to explain a general concept here, so if you send me a personal message that involves p-values, I promise I won’t read it. And this post is covering some complex topics, so it will be longer than my usual post. If you can’t stand the idea of reading anything else about masks, I won’t blame you if you just keep scrolling.

Let’s start with secondary prevention. If you take 1,000 people who have had had a heart attack, and you give them all statin drugs, will you prevent subsequent heart attacks? Yes. The data is simply overwhelming. Statins work extremely well in this environment, all the studies show pretty much the same thing, and there is no longer any debate on their effectiveness in treating heart patients. In fact, it has become unethical to do placebo trials on such patients, because it is so obvious that heart patients live longer when you give them statins, you just can’t deny half the people in the study a treatment that you know will prolong their life. You are not allowed to intentionally kill people while doing research. If you know a drug works you can’t deny it to half the people in the study. So, yes, statins work extremely well when given to people who have already had a heart attack.

This seems odd, doesn’t it? You’re using the same drug (statins) to treat the same disease (heart attacks), but you’re getting different results in primary prevention vs secondary prevention studies. They should show the same thing, right?

Can you figure out why there are such striking differences between the two types of studies? I’ve given hundreds of speeches to various doctors’ groups across the country on this topic, and I would be embarrassed to tell you how many physicians in my audiences can’t figure out the difference. Do you know what it is?

Now, suppose that statins reduced risk of heart attack by 50%, just for simple math. If all of the patients in the treatment group have active heart disease, you might hope that your prevention numbers might get as high as 50%, right? It won’t be that high, of course, because not everyone who has a heart attack has a second heart attack. But many do. So your reduction of risk and heart attacks looks pretty good in that population because they all have heart disease.

So treating people based on one risk factor (say, high cholesterol), will result in you treating a lot of people who will never have heart disease. Whether you treat them or not.

Suppose you had a crystal ball, and you picked out 1,000 people with high cholesterol that you somehow knew would never have a heart attack. Your crystal ball said they were all going to die of pneumonias or car crashes or something. Ok, so now you give all 1,000 of them a statin. What will your success rate be? Zero percent. Because none of them were going to have a heart attack to begin with.

Why? Because a lot of the people that you’re treating didn’t have heart disease to begin with. Whereas in the secondary prevention study, they all had heart disease.

In my speeches, I tell my doctors that if they’re using statins for primary prevention, they had better know what they’re doing with diagnostics, or else whatever treatment they use won’t work. No matter how effective it is. And if all they’re doing is giving statins to people with high cholesterol, well, good luck.

Ok. So after all that, let’s talk about masks.

Do masks prevent the spread of COVID-19? Maybe. Some studies have shown no benefit at all, but some have shown small risk reductions. Not 50%. Maybe 10%? If you choose your data carefully and squint a bit when you read the stats section, maybe 20%? Maybe. But probably less than that. And again, according to several studies, it’s close to zero percent. So the real benefit of masks, under ideal circumstances, is difficult to say for sure.

My point, though, is that it really doesn’t matter how effective masks actually are.

Let’s say for example that you went to a grocery store last year, at the height of the pandemic. Suppose there were 100 people in that grocery store. And suppose all 100 people, including you, are wearing masks. Ok.

How many of those people have active COVID-19 infections at that moment? Half? Of course not. All of these people are healthy enough to go shopping. 25%? Heavens no. Let’s just say for the sake of argument that there are five of those 100 people who have active COVID-19 and don’t know it. If they’re feverish and coughing their heads off, you’ll probably give them some space anyway. So I’m talking about asymptomatic, or nearly asymptomatic, but active, COVID-19 infection. Again, let’s say there are five of those walking around your grocery store.

So your risk of becoming infected with COVID-19 is 5%, then, right? Well, no. How many of those 100 people are you likely to have extended close contact with?

Remember that the vast majority of the infections we tracked occurred at home, or other places where people are in very close contact, in very small spaces, with so-so air circulation, for extended periods of time. Transmission of COVID-19 in public places is rare, whether you wear a mask or not.

So you could argue that we should be wearing masks at home, but not once you leave your house. I don’t think that would help much, either, but I suspect it would work better than wearing masks in public. That would be an interesting study. And good luck enforcing compliance in that study. Talk about hypothetical benefits…

Remember that on that floating petri dish – The Diamond Princess – over 80% of the elderly passengers did not get COVID-19. And they were up to their necks in it for weeks. And they were all old. They weren’t middle-aged healthy people just wandering around a grocery store for 20 minutes.

But again, the exact number doesn’t matter much. Pick a number that makes you happy. But regardless, it’s low.

Now, let’s suppose that masks can reduce the risk of COVID-19 transmission by 20% when used properly. Firstly, I think that’s extremely optimistic, based on the studies we have. And secondly, I would guess that the number of masks in that grocery store being used properly is vanishingly small. But let’s suppose that the studies are wrong, and the grocery shoppers are unusually vigilant with sterile techniques, and the masks in this grocery store actually do reduce the risk of COVID-19 transmission by 20%. Right.

So you reduced your risk of COVID-19 by 2 people out of 1,000. That’s not nothing. But it’s close. And again, I think that’s extremely optimistic.

Why are masks so ineffective, even if we presume that they are effective? Because almost everybody that is wearing them does not have COVID-19. So in those people, there is no chance that they could provide any benefit, regardless of how effective they are.

It’s like giving statins to people who have high cholesterol but don’t have heart disease.

Ok, look. The stats geeks out there are going to notice some shortcuts I took with my math. I used simple numbers simply to make a point. This isn’t meant to be a precise statistical analysis. And others may argue that it’s no big deal to wear a mask. With no real downside, why not, right? And the fans of masks may be plugging more optimistic numbers into my ham-fisted formulas above. But it won’t matter much. Maybe a little. Not much.

Also, just suppose that a new study came out tomorrow that showed that masks reduced the risk of COVID-19 by 50% or something, in that particular study, when you use a certain mask, with a certain sealant, for a certain period of time, or whatever.

Not until somebody can show me some very real benefit in an actual population of actual people leading their actual lives. If masks work only when used properly, but no one uses them properly, then that doesn’t help.

The research on statins was very exciting early on, but their use didn’t really take off until doctors started to see heart attack rates drop significantly in the population at large. That meant that they didn’t just work under the ideal circumstances of a controlled study – they worked in the real world, too. That’s when we really started using a lot of statins.

Also, you can reasonably argue that masks were a good idea, because they got people to leave their houses, and they got the economy going again. That may be true, but that’s not my point.

And I emphasize that I’m speaking of normal people wearing masks in public. I’m not discussing the use of masks or other protective equipment in medical settings. That’s not my point, either.

So what is my point?

If you feel safer wearing a mask, by all means, be my guest. I don’t think they’re entirely benign, but I agree that the risk from wearing masks appears to be small. So whatever.

But if you’re curious as to how much protection that mask is actually providing you, color me skeptical. I obviously don’t know the real benefit of wearing masks, but I strongly suspect that it is extremely, extremely small. A suspicion that has been borne out by population studies around the world.

I openly acknowledge that I don’t know the precise risk reduction provided by masks used in public settings. But I don’t think anyone else does, either. I’m just saying that whatever that number is, I suspect it’s really low.

And I think it’s important that we think this through because this is going to come up again. Probably soon. And next time, we should have a plan.

A plan with some real-world data behind it.

Our response to this virus has been a fiasco. I hope we learn from it.

I suspect we won’t.