Every now and then I read about an act of courage that is so inspiring — and so unlikely — that it provides a necessary balance to my normal dim view of humanity.

Kenneth Byrd. According to a 2014 news story, 67-year-old Kenneth Byrd of North Carolina, his wife, and their granddaughter were at home when they heard a knock at the door. When the grandfather opened the door, three armed thugs forced their way in. After menacing the family, including a boast that they were going to rape the granddaughter, they demanded that the old man open his safe.

The old man led the three men into the next room where the safe was located. While the three home invaders hovered, their guns drawn, Byrd opened the safe. Inside, among papers and a bit of cash, Byrd had stowed a gun for safekeeping.

And thus arrived the old man’s existential and defining moment. He could take the money out of the safe and hand it to the thugs. Perhaps they would leave them alone if he did. Or he could grab the gun and confront the thugs. He might get a few shots off before he himself got shot up. The first option may have sounded too much like rationalizing, the coward’s way out. The second sounded like suicide.

Kenneth Byrd chose the second way, the hero’s way. He was just not going to allow his granddaughter to be raped, even if it meant dying in a fusillade of bullets. So he grabbed the gun and exchanged gunfire with the three goons. Byrd managed to hit all three, but in the exchange he was hit multiple times. (He ended up in a hospital in critical condition.)

Although wounded, the hoodlums got away, stealing Byrd’s car to use as a getaway car. When two of them showed up in a local hospital with gunshot wounds, the police arrested them. They left behind their accomplice lying dead in Byrd’s car, the result of one of the old man’s bullets.

Byrd’s story struck home. I have an eleven-year-old granddaughter. If I had been in the old man’s shoes, I wonder if I would have reached for that gun, knowing I was probably going to get shot. 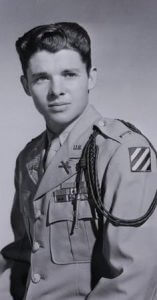 Audie Murphy. Who would have thought that a baby-faced kid, all of 5’ 5” tall and 136 pounds, a sharecropper’s son from Oklahoma, would perform deeds of valor that could fill ten war movies.

At sixteen years of age (he told the Army he was eighteen), Murphy joined up. At nineteen, he climbed atop a burning tank destroyer that was ready to explode. Firing its 50-caliber machine gun, Murphy held off a company of attacking German soldiers, killing twenty. Although wounded and out of ammunition, he led his fellow infantrymen on a successful counterattack.

Before that magnificent act of courage, Murphy had already received 20 awards for valor. The little guy from Oklahoma turned out to be about as big a man as you could find anywhere. 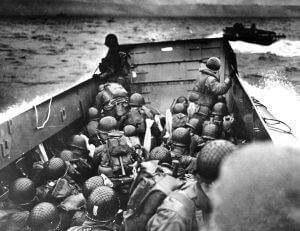 The Boys of D-Day. For me, the most inspiring displays of courage were exhibited by those ordinary Joes crammed in the landing craft on their way across the Channel toward Omaha Beach. It was June 6, 1944, and the invasion of Europe was on.

As they approached the shore, the young soldiers could hear German bullets hitting the armor-clad front ramps, sounds that must have struck fear in the hearts of these young soldiers. But when those front ramps descended, the young men, every last one of them, jumped into the surf in the face of withering German fire. Soldiers in the first two landing craft to come ashore on Omaha Beach were massacred as German automatic fire and mortars rained down from a bluff overlooking the shoreline.

The U.S. suffered 2,400 casualties on Omaha Beach that day. Some of the wounded drowned in the surf as they struggled to reach the beachhead.

Here is one of the cemeteries that contain the bodies of soldiers who died during the Normandy Invasion. (A few years back, I visited the Normandy Museum and this cemetery, and it was a gut-wrenching experienced, believe me.) One hopes these young men will be honored as long as there is a United States to honor them. 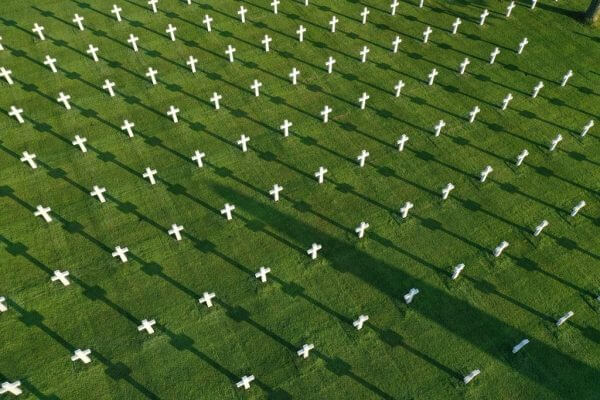 Let me leave you with a quote from the redoubtable John Wayne, “Courage is being scared to death, but saddling up anyway.” Perhaps you have been scared to death but saddled up anyway. I’d like to hear about it.

Postscript 1: I read six different accounts of the Kenneth Byrd episode. None of them seemed to know where Byrd found the gun that he used. One of the accounts mentioned that it might have been in the safe. That’s the version I used. I followed the general narrative of the news story, but it was so sketchy that I had to occasionally imagine what was going on. The original story comes across almost like an urban legend (Lumberton NC, October 25, 2014).

Postscript 2: The closest I ever came to displaying courage was in a tavern in Germany in 1959. I was a soldier at the time. A fight broke out and one poor sap of a U.S. soldier was being beaten senseless by two rather large German civilians. This was just seven years after our official occupation of Germany ended, fourteen years after the firebombing of Dresden. Perhaps these German toughs were taking out their resentments on a U.S. soldier.

My plan was to be a hero by rescuing this outmanned U.S. soldier, so I waded into the fight by pulling off one of the Germans and shouting “Wie geht’s?, my version of “What the [fork] are you doing?” I think he replied that the soldier tried to pick up his girl. Actually, I could only understand a few words of his German. At any rate, I replied, “Weitergehen,” or “OK, carry on.” I think I had come to my senses when I realized that I was very close to getting my clock cleaned by two hulking Germans.

The U.S. soldier ended up on the floor, bloodied and somewhat worse for wear. After a bit, he got up and hobbled back to his table. The damned guy almost got me beaten to a pulp. I’m no hero.