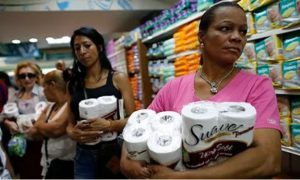 The Guardian published an article about Venezuela’s “success” in 2013. It is still up and now titled, “Sorry, Venezuela haters: This economy is not the Greece of Latin America: Predicting a Venezuelan apocalypse won’t make it happen.” (Of course, they’d gladly trade places with Greece today.)

For more than a decade people opposed to the government of Venezuela have argued that its economy would implode. Like communists in the 1930s rooting for the final crisis of capitalism, they saw economic collapse just around the corner. How frustrating it has been for them to witness only two recessions: one directly caused by the opposition’s oil strike (December 2002-May 2003) and one brought on by the world recession (2009 and the first half of 2010). However, the government got control of the national oil company in 2003, and the whole decade’s economic performance turned out quite well, with average annual growth of real income per person of 2.7% and poverty reduced by over half, and large gains for the majority in employment, access to health care, pensions and education.

A note at the bottom of the article has not aged well:

The subheading on this article was amended on 15 November 2013. The original one, not supplied by the author, ended with the words “in this oil-rich country the only thing imploding is poverty”. This has now been removed.