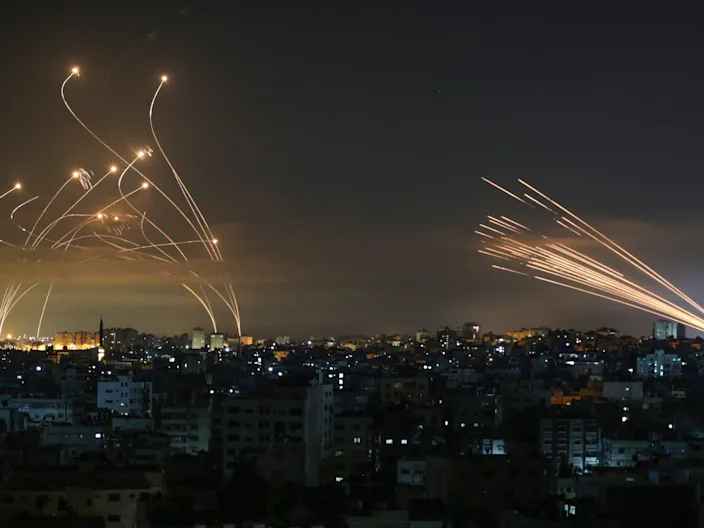 On the right are the rockets being fired indiscriminately by Hamas terrorists at Israeli neighborhoods. … On the left are the IDF’s Iron Dome interceptor missiles…

This photo represents the clash of technologies, ideologies, and civilizations themselves. …

I would add that it also displays rather effectively the battlespace between the fact-based world of rational, reasoned, intellectual honesty versus the pretend world of pseudo-events and fake news narratives.

…After its customary warning to protect civilian life, the IDF took out the 12-story Jala Tower housing Hamas military intelligence offices as well as offices for Al Jazeera and the Associated Press. As far as I can tell from reports such as this photo-filled story in the Daily Mail, no lives were lost in the bombing.

[LINKED IN ORIGINAL:] AP CEO: “AP’s bureau has been in this building for 15 years. We have had no indication Hamas was in the building or active in the building. This is something we actively check to the best of our ability. We’d never knowingly put our journalists at risk.”

… Taking the AP seriously, I demand evidence that the AP didn’t know it was holed up with genocidal terrorists. If such proof is forthcoming, I demand proof that the AP is a bona fide news organization. …

Also, note that the AP cements its place in the not-intellectually-honest world with the straight-faced “We narrowly avoided a terrible loss of life” report that omits the fact that they avoided such a thing because they were given a warning BY THE ISRAELIS “to evacuate … before the place was destroyed.”

Some older but enlightening documentation worth your time to watch:

Have a good day.