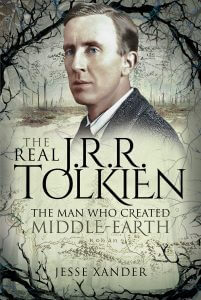 J.R.R. Tolkien may be the most beloved twentieth-century author with the most diverse reader base. He appealed to Christian and New Age audiences as well as readers across the political spectrum. Fame and fortune were the last things he really sought. An Oxford professor, he just wanted to tell some stories.

“The Real J.R.R. Tolkien: The Man Who Created Middle Earth,” by Jesse Xander, is a new biography of Tolkien, the first major biography in nearly twenty years.

It is an independent biography, offering a fresh look at Tolkien. Xander reveals Tolkien as simultaneously archetypically ordinary and extraordinarily remarkable, an obscure professor who wrote momentous fiction.

Xander provides an outstanding exploration of Tolkien’s life. He explores Tolkien’s youth, as a baby in Bloemfontein, South Africa, and then back in Midlands England. Tolkien’s father died young, leaving his mother, Mabel, to raise her two boys as a single mother. Xander examines the influence both his mother’s and father’s family had on Tolkien. He also looks at the effects of Mabel’s (and her boys’) conversion to Catholicism. It estranged them from much of his family, reducing them to near-poverty. At the same time, these hardships cemented Tolkien’s Catholicism.

Xander also examines Tolkien’s education, showing where he gained his love of Old English and mythology.  He examines the course of Tolkien’s relationship with Edith Bratt, whom he married in 1916. Their courtship was protracted, and opposed by both sets of families and relations, yet bloomed into a marriage of over 50 years. Xander also looks at Tolkien’s war service and his career as a young professor, and Tolkien’s influence on his students.

Xander shows how all of these wove together to influence Tolkien’s greatest work, The Lord of the Rings trilogy. He does an outstanding job of tracing how different experiences shaped the work. He also examines Tolkien’s bemused and occasionally exasperated reactions to fame in his old age.

The book contains eccentricities. Xander almost worships Tolkien. This yields an awkward, apologetic revelation the great man had imperfections. Well, yes. Everyone has flaws. Those Xander reveal seem trivial: Tolkien disliked the French and despised what Tolkien viewed as the pollution of modern English by Norman influences.  They are the eccentricities of a typical Oxford Don of Tolkien’s time.

Regardless, “The Real J.R.R. Tolkien” offers a fascinating look at the author, and the influence Tolkien has on modern letters. It is a book worth reading.