I know I write about teaching a lot. It’s because it was my job for a long time. Fun things happened. I don’t know if I told this story before, but I’d like to share it.

Until I became a teacher, I didn’t realize that there were people who found the environment of a classroom to be very, very uncomfortable. And I’m talking about adults here. I guess I didn’t know because I’d always loved going to school as a child, and I had been an active volunteer in my own children’s classrooms when they were young. Also, I worked as a teacher’s aide for a couple of years. So, I’m comfortable at school…which is why I chose “teacher” when I was looking for a career to do when I finally returned to college to finish it, once and for all.

One time I was meeting with a family for parent/teacher/student conferences. The little girl had started acting up in school somewhat and the mom and step-dad were sitting there with me and her and, frankly, she was getting over on her parents. I had mentioned some things that weren’t going well, and mom was pleading with the daughter to explain why she’d act like that in school. Well, this wasn’t going anywhere, I could tell. The little nine-year-old was running this meeting with the adults asking for her to cooperate.

The stepdad was soooo not comfortable.  He was a man who worked with his hands, obviously. They were grease-stained, with nails that were a little dirty. He was wearing a mechanic’s shirt and pants, and was at this meeting to support his wife. But being in a classroom with a teacher was clearly not a place he wanted to be. I realized I needed to grab back the power in this meeting.

I quickly thought of something I could say about the student to move the conversation from negative to positive, so I pointed out that she was a creative and talented writer. Then, a light bulb came on in my brain! I said to her, “Did you know that you can earn money with writing?” I had her attention now. I replied, “I have had some stories of mine printed in magazines before! And they paid me for them!”

I turned to stepdad. “Once I had a story printed in Easyriders Magazine. They put a Dave Mann illustration with it, and paid me $100 for it.”  He looked up at me, and blinked, and said, “Easyriders…the biker magazine??”

“Yes,” I replied. “It was in the February 1980 edition. I wrote about a Panhead, but they changed it to Flathead 80 because it was their eightieth edition.”

He sat up straighter and asked if I had a motorcycle. I told him about my husband’s bike, a 1969 Shovelhead with a Panhead low end. “Do you have a bike?” In fact he did, and we chatted for just a moment about Harleys, and then I turned again to my student and talked about her writing skills.

Suddenly, she was shrunk back to a little fourth-grade girl. Her mom was a grown woman, stepdad was a grown man. He and she pointed out that there wouldn’t be any more foolishness at school, and that their little girl would cooperate and they’d make sure of it. We were the adults. She was the child. Everyone was now in their proper roles and we were good.

You never know what will be the key to helping you build rapport with your students’ families. You just never know. 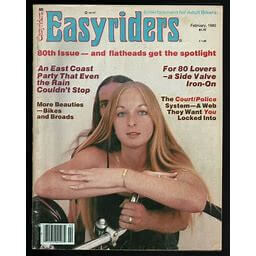