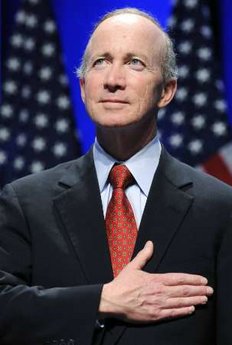 The banner headline on the Drudge Report at this hour:

Who? &nbsp;Ricochet’s own Mitch Daniels, the governor of Indiana, that’s who.

From the report in the Des Moines Register to which the Drudge Report links:

“We must be the vanguard of recovery, but we cannot do it alone,” Daniels told about 500 attending a banquet at the Conservative Political Action Conference in Washington, D.C.

“We have learned in Indiana, big change requires big majorities,” the second-term governor and former Bush administration budget director said. “We will need people who never tune in to Rush or Glenn or Laura or Sean. Who surf past C-SPAN to get to SportsCenter. Who, if they’d ever heard of CPAC, would assume it was a cruise ship accessory.”

The speech was a breakthrough moment for Daniels, who has hinted more in recent months that he is entertaining a 2012 campaign.

A breakthrough moment? &nbsp;Not for those of us who have been following Gov. Daniels here on Ricochet, of course, but I see what they mean.