You may remember from Eighth Grade English or Grammar that a preposition is “a word or group of words used before a noun, pronoun, or noun phrase to show direction, time, place, location, spatial relationships, or to introduce an object.” Some examples of prepositions are words like ‘in,’ ‘at,’ ‘on,’ ‘of,’ and ‘to.’ You can find a full list of prepositions here, and yes, “away from” is a multi-word preposition.

My “aha” moment when transitioning from a Marcusian liberal leftist in college to a Reagan-supporting conservative was over a pair of prepositions. I had read conservative authors such as Russell Kirk and Barry Goldwater (“Conscience of a Conservative,” still a must-read), among others, who discussed “freedom of.” You know, just like our Bill of Rights.

Then I picked up a copy of the late Senator and Vice President Hubert H. Humphrey’s 1968 presidential campaign book “The Cause is Mankind.” In it, I read where the legendary Minnesota Democrat discussed freedom “from” things like hunger, poverty, etc., along with the promotion of the welfare state. It wasn’t hard to figure out that Democrats and leftists acquainted freedom with security, while most Republicans and conservatives saw freedom more literally. Freedom wasn’t running from anything. It just was. 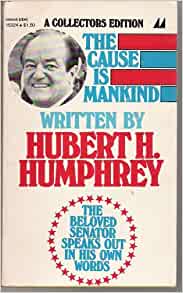 Humphrey’s construct has evolved today, at least on college campuses, to freedom from “being offended” or freedom from opposing views, even freedom from your gender assigned at birth, and of course, freedom from viruses. That’s not the “freedom” our founders had in mind when discussing “freedom of speech, or of the press” — you know the thing.

That’s why people of The Left will tell you that, of course, they believe in freedom. It just may mean something different, or perhaps more than what our framers articulated. That is why it is always helpful to stop and define terms now and then.

This week’s public political drama in the House Republican Conference, in one sense, is over prepositions. Moving “on” from Donald Trump, versus moving “away from” the former President.

Incumbent (for now) House GOP Conference Chair Liz Cheney (R-WY) is all-in on the “away from” Donald Trump preposition (and proposition). She is joined by a smattering of other colleagues (US Rep. Adam Kinzinger, R-IL) and a host of chattering classes from the pious right (the usual suspects at The Dispatch, The Bulwark, and even National Review) to the slobbering left that is working overtime to drive wedges between pro-and anti-Trump Republicans, keep them divided and distracted. At the same time, they go about transforming America into a progressive paradise.

Meanwhile, House GOP Leader Kevin McCarthy (R-CA), his second-in-command Steve Scalise (R-LA), and a vast majority of their Conference are all about winning a majority and the Speaker’s gavel after the 2022 elections. And they are closing in on that goal. Their favored preposition is moving “on” from Trump, specifically the divisive battles over the 2020 election, January 6th violence, and impeachment to a unified caucus and party and a future majority.

It is obvious that McCarthy and Scalise, while pro-Trump, are pursuing a challenging big-tent strategy. They know it will take both wings of the party to win. They understand, perhaps better than most, the class and cultural battles underway right now. They also understand how Trump’s persona – love him or hate him – has come to be used as a cudgel by Democrats to keep Republicans divided – at least the appearance of division. Most Republicans still support Trump (albeit slipping somewhat), as polls clearly indicate.

To understand why read The New Class War by Michael Lind. You haven’t read it? Neither has anyone, it seems, at The Dispatch, The Bulwark, or National Review. Or Liz Cheney or her caucus supporters, for that matter, perhaps except the parts where he refers to Trump (and others) as a populist demagogue. Here’s an excerpt from a review of Lind’s book in Britain’s The Guardian they may have missed.

“…the idea that Trump was put over the top by white nationalism is not what the vote totals show, Lind says, pointing to polling data that after 2010 shows that white progressives have moved far to the left of African and Latino Americans.

“This is really being driven by elite whites, not by members of minority groups necessarily. They pose as saviors and champions of victimized groups and take a highly melodramatic view of politics.

“Between an oligarchy in technocratic form and outsider populism, Lind predicts that oligarchs with money and connections will win nine times out of 10. But as they turn narrow and nepotistic, the ruling class will further lose their connection to reality.”

McCarthy and smart, inclusive Republicans want to build on Trump’s success with multi-ethnic working-class Americans while making the 2022 election about something other than Trump personally as a way to win back voters in traditionally GOP suburbs. After all, the GOP did pretty well below the top of the ticket in 2020, gaining House seats despite losing the presidency and nearly keeping the US Senate against tremendous odds. They believe – and polls show – that suburban Americans disagree with much of what Democrats are pushing, from defunding police to eliminating voter ID requirements for elections, and are poised to return congressional Republicans to power. And the border crisis continues to play out, with most voters expressing dissatisfaction with the Biden Administration’s handling of it.

Democrats and their willing accomplices in GOP ranks are having nothing to do with that. Trump, the personality, is a useful foil in a battle over the suburbs, largely won by Democrats in the 2020 election. And the suburbs have grown a lot during the pandemic, as urban professionals continue to flee from crime-ridden and riot-prone inner cities and overly permissive, even malevolent prosecutors.

McCarthy has three very tricky political challenges: keep Trump’s desire for the spotlight under control (good luck with that). Second, as I’ve mentioned previously, showcasing a new set of leaders, from Sen. Tim Scott (R-SC), who gave perhaps the most successful response ever to a Presidential address (if only to expose who The Left really is), to Rep. Elise Stefanik, who will likely succeed Cheney, perhaps this week, as the new House GOP Conference chair. That, despite Stefanik’s notably less conservative voting record than Cheney’s.

Third and finally, getting anti-Trumpers to buy in on the need to keep Trump voters in the tent to advance the party’s short and longer-term interests. That may be the toughest one of all, given how much money The Left has invested in anti-Trump causes such as the now-discredited Lincoln Project. And Liz Cheney isn’t helping. Cheney and her colleagues want to completely excise Trump and his influence over the party, which would effectively neuter it and guarantee Democratic success for a generation, if not spawn a new political party for the disaffected, despite having been tried and failed before.

The theater around replacing Cheney in the leadership is predictable but should not prove damaging in the long-term – no more so than a campaign replacing a campaign manager when a shake-up is called for. Remember, “Trumpism isn’t an ideology – it’s a fighting posture,” pollster Kristen Soltis Anderson wisely observed. Just check out Florida Gov. Ron DeSantis’ popularity.

Cheney never seemed to grasp that. After all, her voting record strongly supported Trump’s agenda. More so than Stefanik’s. Smart Republicans are trying to get suburban voters to separate Trump, the man, from his agenda, which looks better by the day. Especially concerning the southern border. Remember, winning elections is about addition, not subtraction.

This may be a tough week for the GOP, as its anti-Trump defeatists rend their garments and lament Cheney’s descent from leadership under the spotlight of fawning media and cheering Democrats. Some purists on the right will assault Stefanik’s voting record. But as Qui-Gon Jinn said in Star Wars, “there’s always a bigger fish.”