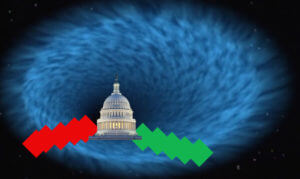 I wanted to like Noa Tishby. I was prepared to hear her out as a courageous voice in Hollywood and a potential cobelligerent against the new Red-Green alliance.* I value Scott Johnson’s opinions in the main, having followed PowerLine Blog since they eviscerated Dan Rather’s attempt to steal the 2004 election with a blatantly fraudulent story about George W. Bush’s Texas Air Guard service record. Scott recommended readers to “meet Noa Tishby.” So, I read Robert Sarner’s Times of Israel profile “Israeli actress Noa Tishby’s ‘Simple Guide’ to Israel shakes up US progressives.” So far so good. Then, I followed the link to Matt Lewis’s long-form web video interview of Noa Tisby on the new book she reportedly wrote entirely on her own, Israel: A Simple Guide to the Most Misunderstood Country on Earth. Sad.

I embed, you go watch and decide, then come back to check my opinion. Or read on and then go check my assessment against the tape. By way of warning, this was not safe for younger children’s ears. This is so for all too many web-exclusive videos. She asks the profanity question, common these days as a “mind if I smoke” question used to be. Once the cursing/smoking light is on, the filter comes off, especially late in the interview when she talks about being a woman in Hollywood with “Weinstein” being the daily norm for decades.

Tishby clearly understands the deep ignorance of the American cultural elite and is concerned about invincible ignorance among a significant portion of American Jews. She faces constant requests for a source, a book to read about the facts and history of Israel. So, she filled her free time over the past 18 months writing a single accessible volume, including the good, the bad, and the ugly of Israeli history. No, I cannot report on the book itself.  The book is not yet even in my libraries’ online new book queues.

From her interviews and related articles, I am not really her target audience anyway. Since her hardcover edition is reportedly selling briskly, hopefully, copies are actually getting to left-liberals, progressive Democrats. Unfortunately, we are likely no longer in the late 1970s environment, when Rose and Milton Friedman could write a book for the reading public, like my parents, and actually shape public thinking around Free to Choose.

Shortly after being interviewed recently on popular American TV talk show “The View,” Noa Tishby received a text message from a friend. The message had her seething later that morning during a Zoom interview with The Times of Israel.

“It’s just horrific what he wrote me,” says Tishby, before reading the text message aloud.

“We all have decisions to make in our life,” Tishby reads from her phone. “Ben [Shapiro], Bill [Maher] and Meghan [McCain] are three of the most disgustingly Islamophobic people in public view. Noa, you’ve played a deeply important role in my life and I’ll forever be grateful to you, but if you continue saying things like ‘anti-Zionism is antisemitism,’ there’ll be no room for people like me in your life. I will continue to stand with people of conscience around the world in demanding full liberation for the Palestinians.”

The video should be rated X for language when she discusses her professional experience as a woman in show business toward the end of the video, but the vulgarity is not gratuitous. She recounts her lunch meeting with Harvey Weinstein, for example, at about 48:00. If the language might offend you, give it a pass. She also throws in a stupid swipe against Trump in the course of making an extremely interesting point about the diplomacy fostering the Abraham Accords. I nevertheless thought Power Line readers might enjoy getting to know Tishby (and I mean as an advocate of Israel). I certainly did.

But she simultaneously asserts that anti-semitism rose in America only in the last four years and that this was due to President Trump (“that which shall not be named”) and his supporters (“Charlottesville”), AND President Trump is so stupid and ignorant that “Jared” pointed to the map and told him where to sign. She thought herself quite clever and progressive in that. Not a word of awareness about the poisonous bargain between the secular left and Islamists in both Britain and now the Democratic Party in America. Not a word about blacks attacking religious Jews on the streets. Of course, as a secular leftist herself, the religious conservatives are her domestic political opponents, so their brethren being beaten might not register for her as more than a sign that those Jews should be more like her. Not a word about who stopped the US going along with UN organizations focused on attacking Israel. Not a word about Democrats failing to prevent Jew-haters being elected in their party and then failing to vote to censure their continuing anti-Semitism. In short, typical leftist self-assured blindness.

What she thought clever and what Scott Johnson thinks merely “a stupid swipe” is actually far worse. She reinforced the classic anti-Semitic belief that Jews control the world by manipulating world leaders. When asked about her reaction as a woman of the left to President Trump achieving something long desired by liberal leftists, especially Zionists like herself, she completely dismissed the possibility. She asserted that the President of the United States was entirely uninformed, did not even know where the region was on a map. She insisted that an Israeli authority she respects told her that Jared Kushner was entirely responsible for the Abraham Accords. By her account, Jared, a wise Jew, cleverly told the stupid, ignorant President Trump where to sign his name on an agreement about which Trump supposedly had absolutely no knowledge. That is stunningly ignorant, objectively false, and obviously destructive to her stated purpose of combatting uninformed antipathy towards the one Jewish state.

By the way, Tishby’s dismissive comment and explanation of how the Abraham Accords got done affirms a deep dark stereotype in Arab popular culture. Antisemitism has been deeply embedded in Arab popular culture for decades. She may actually put at risk the very Arab moderates she repeatedly invokes as people who should be able to work with people like her.

I note Noa Tishby has stuck to left-of-center new and old media. In particular, she has not shown up on Fox News or on any conservative talk show. The problem is, she needs more than a handful of non-conforming progressives, convicted by the facts and stories in her book, to disconnect one major political party and the American cultural elite from their alliance with Islamists and Jew-hating radical black groups. Until the party on her side of the aisle is crushed like Labour was crushed in 2019, I do not see incentives changing, so I do not see much receptivity in the cultural cadre of the left to messages that threaten their current successful political coalition. If Israel is not the villain in the Middle East, if we are to accept that the story is complicated then someone is going to start asking why the same does not apply to the United States. That just will not do right now.

* The older meaning of the Red-Green alliance was a socialist-environmentalist party alliance in European democracies. We were not supposed to notice that their joint agenda benefited Moscow. The secular left more recently allied with Islamist parties and groups as Muslims became a significant voting minority in Europe and an excuse to attack both Christians and Jews as oppressors, as colonialists. This was noted at least as early as 2013: