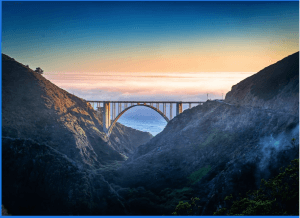 Here in California, as Victor Davis Hanson argues, the great figures of business and political life once envisioned grand works—and built them. In the nineteenth century, the railroad up over the Sierras to create the western end of the transcontinental railroad. In the early twentieth century, the reservoirs and lakes to generate power—the Hetch Hetchy Reservoir, Huntington Lake, many others. In the middle of the last century, the canals, tunnels and pipelines that carry water from the Sierras through the Sacramento and San Joaquin Valleys to Los Angeles.

Which brings me to the Bixby Bridge.

A few days ago my wife and I drove south from Carmel along the Pacific Coast Highway, crossing the Bixby Bridge. The structure isn’t merely beautiful. It’s thrilling. The central span soars to 280 feet, a height that once made the structure the tallest single-span bridge in the world. When engineers designed the bridge, I learned when I did some reading afterwards, they debated whether to build a smaller structure farther inland, deciding instead to build the present structure, which is located on on the very edge of the Pacific, in part for the sheer challenge of the thing. Construction began in August 1931, ended in October 1932, and cost just under $200,000—something under $5 million in today’s money.

Ponder that. In just 15 months and at an expense of less than two hundred grand the Californians of ninety years ago produced one of the most compelling structures in the world.

Elon Musk wants us to go to Mars, and that’d be fine with me, as long as it’s Elon’s money. But wouldn’t it be splendid—really splendid—to build right here on earth? To create enduring monuments of usefulness and beauty? How can we recapture the spirit of the Bixby Bridge?