Disclaimer, before I even start:

I dread the first few weeks of May.  Every. Single. Year.  It’s one of those stretches of awful memory that many of us have at different times of the year, when it seems that regrets/trauma/cataclysm all pile on top of one another to render certain times insupportable and sometimes just plain unbearable.  To wit:

I cannot ever forget the first time that Mr. She and I, and his three children–only one of whom is still alive–went to see the first Star Wars movie when it opened in May of 1977 (although not on the fourth).  From the moment of its fanfare (Dum-da-daa! Da-da-da-da-da-Dum-da-daa!) to the opening crawl, to the very end, it was magic!  It was thrilling.  It was lovely.  We’d never seen anything like it! (Never mind that, over 40 years later it’s showing its age, that I can now acknowledge that the acting was wooden, and that, in terms of the present, the special effects were pretty hokey.  For its time, it was epic.) It spawned a phrase for my stepdaughter, in which she began to refer (always in affection jest) to Harrison Ford as her “future husband.” And it gave a foundation to a lifetime of movie memories which she and I, the only survivors of the time, are still enjoying.

Here’s to family.  And friends.  And love. And memories.

May the force forever be with us all.

And here’s the technical drawing (an annual occurrence) that my granddaughter–eight years old at the time–sent me in 2016, when she announced that her Halloween costume (which I’m proud to make, every year) should be that of Darth Vader.  But, note, she later clarified, a “girl Darth Vader.” 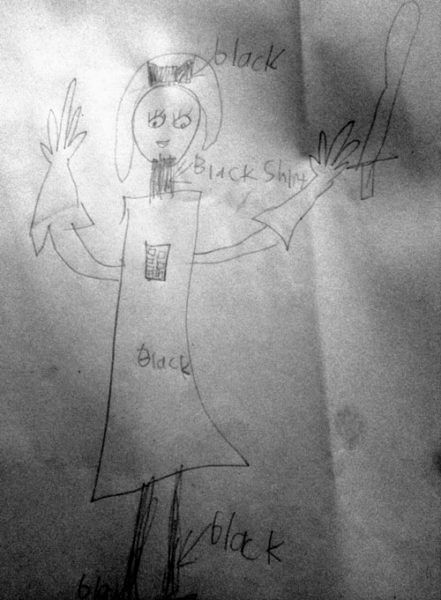 And here’s the result. (Black and shiny, just as ordered.  Together with a substantial amount of light-reflective tape, insisted upon by a worried Granny):

I hope she passes along her love of the classics to her own children, a decade or two from now.

PS: BTW, and as it should be, she knows very well that Han. Shot. First.

Published in General
Tags: May The Fourth, Star Wars