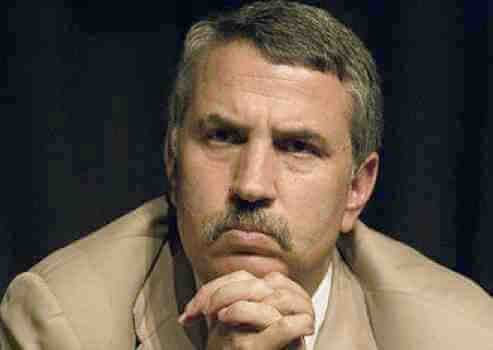 It’s been seven years since the New York Observer published this guide to writing &nbsp;your own Thomas Friedman column, but it remains the definitive instruction manual. Thank you to the&nbsp;Carpetblogger&nbsp;for reminding me of it.&nbsp;

Begin your first paragraph with a grandiose sentence and end with a terse, startlingly unexpected contradiction:

&nbsp;a. The future of civilization depends upon open communication between Yasir Arafat and Ariel Sharon. If the two don’t speak to each other, the world edges closer to the precipice of total war. If, on the other hand, they manage to engage in open conversation and resolve their differences, Israelis could soon be celebrating Seders in Saudi Arabia. But for now, the two men can’t speak. Why? You can’t make a collect call from Bethlehem. …

&nbsp;a. The Jacuzzi was nearly full when Ayman al-Zawahiri, former surgeon and now Al Qaeda’s head of operations, slid in.

&nbsp;b. It was Thomas Pynchon on the phone. “Tommy,” he said, probably aware we share that name ….

&nbsp;c. Despite the bumpy flight, I felt comfortable in the hands of a pilot as experienced as Amelia Earhart.

7. Include unknowns from hostile places who have come to espouse rational Western thought and culture:

Now, I laugh, but I must say that the “Beirut” part of From Beirut to Jerusalem&nbsp;was magnificent journalism and the best description of Beirut I’ve ever read. So I laugh respectfully.

But&nbsp;I just received Michael Totten’s new book,&nbsp;The Road to Fatima Gate,&nbsp;in the mail (thank you, Encounter Books!), so it may well be that I’m about to read an even better description of Beirut. I have very high expectations. Still, until I read it, Friedman holds the top prize.

But that doesn’t mean we shouldn’t laugh at him–in a respectful way–which is why I also remind you of the moustache of understanding: