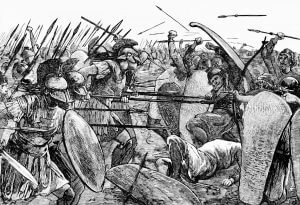 I just finished teaching military history in a homeschool co-op. The last day was devoted to the topic of masculinity: what it is and how it relates to war. At the last minute, I tore up my notes and rewrote my class plan in response to some reading I found.

The old plan started with a discussion of courage based on a reading from Gates of Fire by Steven Pressfield, which gives a fictional account of the Battle of Thermopylae. We had previously covered Christian just war theory and I thought a bit of pagan philosophy would be an interesting contrast.

In the revised plan, I covered Gates of Fire just enough to plant the word “courage” in my students’ brains. Then I pivoted to a blog post from Scientific American about the innate tendencies in male and female personalities. Notably, men tend to be more assertive and risk-tolerant. This should be a mundane observation but of course, it is not in today’s world.

Then I pivoted to Richard Hanania’s article “Why Is Everything Liberal?” He answers the question by showing the extreme imbalance between liberal and conservative political engagement.  Basically, liberals are vocal and eager to spend money on political causes. He said that conservatives are either apathetic (the unflattering view) or simply saner (since political action correlates with poor mental health). I’d add that conservatives devote their time and treasure to religion whereas for liberals politics is their religion.

I was reluctant to introduce partisan political considerations into the class, so I asked the boys to think of “liberal” as meaning “woke.” I should mention I am, almost certainly, the most liberal (heh) person in that class. All these boys are extremely comfortable sharing the opinions on politics (and on every other conceivable topic, but never mind) and the dominant political attitude is semi-ironic pro-Trumpism. It is what one mom described as a “lively” class. I much prefer that to its opposite.

Then, speaking quickly as my 65 minutes ran out, I pivoted once again to Strauss-Howe Generational Theory.

That squeaking noise I hear is many of you rolling your eyes. But I believe SHGT, at least in its broad outline of rise and fall, is undeniably true. SHGT says each up and down cycle of history is divided into four “turnings” of 20-25 years each. Significantly, a cohort is most shaped by the turning in which they come of age, i.e., are young adults. The four turnings are:

The HIGH: Society is unified and confident. Institutions are strong. Individualists are marginalized. The young adults in this turning are ARTISTS.

The AWAKENING: Prominent voices are dissatisfied and look to new philosophies and religious experiences. The young adults are PROPHETS.

The UNRAVELING: Society fragments. Institutions are weak and individualists push society in a multitude of directions. The young adults are NOMADS.

The CRISIS: War, revolution, and natural disasters destroy the order established in the previous High. A new High gestates amid the chaos. The young adults are HEROES.

Even if you don’t know SHGT, you hardly need to be told that the last High was the 1950s and that we are presently deep into the Crisis foretold. Okay, but what does that have to do with military history and masculinity?

My modest contribution to SHGT is to describe each turning in terms of its neglected virtue:

In the class handout, I left the last virtue blank, just as you see here. Based on what we had discussed, and to my great satisfaction, my boys had no trouble filling in the blank: Today’s CRISIS needs young warriors willing to engage a chaotic, hostile culture as HEROES possessing the virtue COURAGE.